Wehrmacht
Your Finest Hour is the first level of D-Day, the first mission in Medal of Honor: Frontline. It occurs on D-Day, June 6, 1944, at Omaha Beach.

This mission is meant to give you an adrenaline pumped introduction into the game as well as a quick tutorial of the game's controls and mechanics.

Lieutenant Patterson decides that the Allies will need every available soldier to storm Fortress Europe on D-Day. He makes it back to the USS Thomas Jefferson in time to board a Higgins LCVP and get to the beach. He is tasked with destroying the bunkers defending the sea wall. When they are destroyed, the Captain tells him about a special mission that he will need to go on.

Three battleships are off in the distance firing volleys of shells at the coast. The camera pans down through the incoming LCVP Higgins boats. It focuses on one. As the camera moves down the boat, one soldier coughs, another vomits. The soldier standing next to Lt. Jimmy Patterson crosses his chest. Two Allied aircraft fly over head and the player takes control of Jimmy.

Several mines explode ahead of the boat.

An fighter plane flies in from the left, strafing the water with bullets. He hits the LCVP to the left and it explodes. All of the soldiers inside are killed and the boat begins to sink. It crashes into Jimmy's boat but does no damage.

Mines continue to explode all around the boat.

Captain: "Alright! Listen up! When the ramp drops, move out! If you get lost, look for me!"

Even more mines explode around the boat as it gets closer to the shore.

Captain: "Stay with me and we'll get through this! We've gotta take that beach!"

The ramp lowers. The Captain barely makes it out before a bomb hits the boat and sends Patterson and the entire squad into the water. When Patterson lands in the water, seven men are already dead and floating to the bottom, from being shot. Two more soldiers attempt to make it to the surface but are shot while running up the slope.

Patterson makes it to the surface and withdraws his M1 Garand rifle.

Captain: "Patterson! Over here! Get over here!"

Patterson runs to the Captain who is hiding behind one of the larger pieces of destroyed LCVP.

Captain: "We've got a hell of a mess here, that artillery strike scattered what's left of our squad all over the beach. Four of our members are over there. Help them move up the beach to the sea wall!"

Just as he finishes talking, a soldier runs up the beach and hits a pole mine sticking out of the ground.

Captain: "Dammit! I'll give you some covering fire! Now move out!"

The Captain leans out to fire at the enemy bunkers as Patterson runs across the beach. The first squadmate is kneeling behind an obstacle.

Squadmate 1: "Get over here! I'm pinned down by fire from that bunker! I need cover!"

Patterson fires enough shots at the bunkers for the soldier to make a run for it. He makes it to the embankment. As Patterson runs to get to the second squadmate, he comes across a medic helping a wounded soldier by a hedgehog obstacle. As the medic prepares a syringe the wounded soldier is shot. The medic shakes his fists in frustration and is then shot himself. Patterson runs to the second squadmate.

Squadmate 2: "Gimme some cover and I'll get the hell outta here!"

After shooting at the bunkers enough, the third man makes a run for it. He also makes it to the embankment. Patterson spots the final lost squadmate and runs to him.

Squadmate 4: "Help me move up the beach to the sea wall!"

Patterson fires again. The final soldier runs for it. A German fighter aircraft strafes the beach, barely missing the squadmate. The plane circles around, trying to hit Jimmy, but misses and flies away. Patterson runs up to the sea wall to join his squad.

Captain: "Ivarsen! Get out there and retrieve those bangalores!"

Ivarsen runs but is quickly cut down by German machine gun fire.

Captain: "Dammit! We gotta get the wire clear! Patterson! You're up! Get over here! Private Jones has enough bangalores to clear a hole in the wire! But he's pinned behind that Belgian gate down the line! Help Jones back to our position! We'll give you cover fire! Wait for my order! Covering fire! GO GO GO!"

As all the soldiers fire, Patterson runs down the embankment to the Belgian gate where Private Jones is holding out.

Pvt. Jones: "HEY! Over here! Patterson! I won't make it back with this load of bangalores unless you give me cover! Stay behind me and keep shooting! Ready?"

Pvt. Jones: "Stay with me Patterson! Watch for fire from those bunkers!"

Jones trips on his way but the two make it back safely.

Jones shoves the bangalores into a depression in the embankment. He dives away.

Captain: "Fire in the hole!"

The massive explosion clears away the wire.

Captain: "We've got cover! There's a defilade on the other side! Everybody over the sea wall!"

The squad moves. Jones advances into the minefield by himself and is hit by two mines, killing him. The rest of the squad stay at the base of the bunker.

Captain: "Patterson! Get over here! Now! We'll never get inside that bunker unless we loose the two machine gun nests guarding it. Patterson, if you can make it across that minefield to the turret, you can use it against those nests up there. We'll cover you. Covering fire!"

The soldier nearest to the bunker edge opens fire with his M1 Garand. Jimmy finds away around the minefield that killed Jones and into the trench. He encounters two Wehrmacht soldiers but swiftly defeats them. He climbs up a ladder to the turret and uses it to quickly demolish the machine gun nests on the ridge. A squad of eight soldiers emerge from the nearby bunker and attack from the trench but Patterson easily defeats them with the MG-42. The rest of the squad runs across the minefield. Only the Captain and two others make it. The Captain enters the trench with Patterson as the two others hide under the bunker.

An explosion blocks the trench entrance with debris. 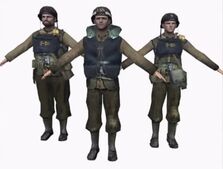 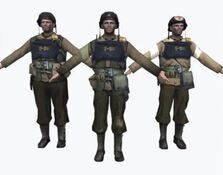 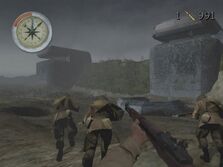 Beta level. It is seen that initially the breakthrough took place on the other side.
Add a photo to this gallery
Retrieved from "https://medalofhonor.fandom.com/wiki/Your_Finest_Hour?oldid=51974"
Community content is available under CC-BY-SA unless otherwise noted.