Yard by Yard is the second level in the mission Several Bridges Too Far and is the eleventh level in Medal of Honor: Frontline.

We just heard Brigadeführer Harmel ordered Nijmegen bridge to be blown. Thanks to your efforts, Jimmy, the span remained intact, and allied forces crossed into Nijmegen last night! Now, we must deliver those medical supplies you liberated to British troops holding out in Arnhem.

The Brits are able to spare a man to drive the truck, but you must scout ahead and destroy any roadblocks. Although combat in the residential discrict is light, Arnhem is crawling with German and Dutch civilians. The enemy is supposed to be calmly evacuating civilians, but we have reports of looting and assaults. Be on the lookout for any civilians in need of your help.

Finally, the Germans have a command post nearby for relaying orders to troops deeper in Arnhem. Locate and destroy it. In addition, find your way to Arnhem and contact Sergeant Kelso of the 1st British Airborne Division. He and his squad will guide you through what's left of the city, and hand you off to Jigs along the way.

Jimmy exits the medical truck and a few Germans are having an argument about a transfer.

German NCO 1: "They haven't decided yet."

The Germans are still arguing while Jimmy opens a door leading to the upstairs of a bakery.

Jimmy kills the man guarding a MG-42, mans it, and clears the first enemy checkpoint.

Later, when he walks downstairs, he shoots and dispatches the enemy soldiers trying to find him, and walks down the street and kills more Waffen-SS soldiers, then opens a gate to a house, where the second checkpoint is close by. Jimmy kills two soldiers smoking outside the house, and goes inside. As soon as he enters, more Germans begin shooting at him. He kills them, and goes up the stairs and into a room with a secret passageway. Patterson crawls through the passage and into another house. He enters a room to the right where a MG-42 is, and neutralizes yet another German roadblock.

After he gets off the machine gun, several enemy soldiers rush up the stairs, and Jimmy kills them. He walks in on a German using the toilet in the house, but is eliminated. He kills the rest of them and goes outside, where he finds a Waffen-SS officer tormenting a resisting civilian.

Waffen-SS Officer 1: "What are you going to do about it? Next time I won't be so nice."

Jimmy opens the gate, and the officers are still interrogating the man.

Waffen-SS officer 1: "Get moving while you still can."

Jimmy inches outside, but is detected by Germans troops.

Waffen-SS Officer 2: "What was that?"

Patterson bursts out and kills any soldier in sight, saving the civilian from the German officers. The man comes over to where Jimmy is standing and collapses near a shed.

He enters a small tunnel-like passage which leads to a gate and a burning shed. Jimmy sees a woman and her teenage daughter eating at a table with an elderly woman in a house.

Mother: "No cake. This is fine! Stop fussing."

Patterson goes through their gate and opens the door, which shocks the woman.

Her daughter tries to warn her, but to no avail.

The mother doesn't listen and instead tells her daughter to stop eating for the moment.

Mother: "Stop eating and get over here!"

German soldiers begin firing on the house, startling the young lady, she screams and falls to the ground with her hands above her head. Patterson runs up the steps and a man hiding in the attic drops a box of grenades for him from the passage to the attic.

Jimmy grabs the grenades and enters another room with a secret door in it. He makes his way to the other room and kills the lone soldier in that room, takes hold of the machine gun and eliminates another checkpoint, but a tank soon rolls by. Patterson stops the tank but is ambushed by two Germans behind him. He kills as many soldiers as he can downstairs and takes a shotgun from the house and blasts the men in the backyard.

He then opens a gate and catches the attention of a lady in a window across the street.

Patterson finds another tunnel-like passage and uses it to get to the street, where more Germans are now interrogating a civilian, and the lady hollers out to a fellow civilian.

Waffen-SS Interrogator: "You won't be here for long."

Civilian Man: "What are you going to do about it?"

Jimmy walks out into the street, and the lady is still trying to get a hold of her friend.

Jimmy kills the interrogator and his men, goes down an alleyway and opens a gate, and raids the next house. He kills uncovers the last checkpoint when he kills a man in another room containing a secret tunnel. He then find the room with the MG-42 and hears a conversation between German soldiers at the roadblock.

SS Panzer Officer: "That's not what I said. Listen and follow orders!"

The men are killed by a burst of machine gun fire and Jimmy makes way for the medical supplies truck. Jimmy comes to the lower level of the house and eliminate the soldiers. After a brief walk, an old woman is being "talked to" by the Germans.

SS Officer: "You're asking for trouble!"

Patterson dispatches him and a few others. He uses the machine gun to destroy the last tank in the neighborhood. The medical truck drives past and into Arnhem. Jimmy disables the German radio sending reinforcements to the Arnhem war-zone and finally finds his way to the city itself. He runs into a yard with a pile of utensils and a ladder to help him get to the next house. There, an old man wearing a World War I style helmet takes a shotgun from his shed and begins providing cover for Jimmy, but is killed almost immediately.

Jimmy then clears out the German soldiers in each yard and checks all the houses for a radio. He clears the last yard on the right, and finds two Waffen-SS men guarding a radio. He kills them along with the communications cable. He exits and goes into a large home. Inside, He finds and kills many enemy soldiers outside and inside, both on top of roofs and running down the alley. After a hard, long firefight, Jimmy leaves the neighborhood, and enters the bombed-out center of Arnhem.

In Yard by Yard Patterson is attempting to reach the besieged British Forces in central Arnhem. Before doing so, however, he must assist in clearing enemy roadblocks, disable radios, and finding his way to bombed-out Arnhem. With him is a hijacked German supply truck also on his way to the British Airbourne troops. 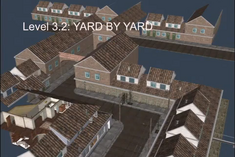 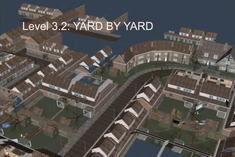 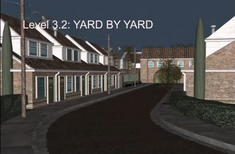 Yard by Yard level map #3.
Add a photo to this gallery
Retrieved from "https://medalofhonor.fandom.com/wiki/Yard_by_Yard?oldid=47775"
Community content is available under CC-BY-SA unless otherwise noted.