Medal of Honor Wiki
Register
Don't have an account?
Sign In
Advertisement
in: Handguns, Revolvers, Medal of Honor: Allied Assault weapons,
and 5 more

The Webley Revolver is a British handgun featured in Medal of Honor: Allied Assault's expansion packs, Spearhead and Breakthrough. The Webley revolver was the standard issued service pistol for the United Kingdom from 1887 to 1963 when it's replaced by the Browning Hi-Power. Many variants of the Webley exist, most notably the Mark VI which is featured in Allied Assault's expansion packs.

The Webley revolver is first seen in the end of the first level of when Barnes meets up with the British commando squad named "Foxhound" and he was given one. For the rest of the Normandy campaign the player has the Webley as a sidearm. The Webley in-game is powerful, but carries only six rounds in a magazine and takes a little longer to reload when compared to the other available handgun, the M1911. The Webley makes a return in the 2nd expansion pack but only in the multiplayer mode, although it can be usable in singleplayer by using cheat code to use all weapons. It is the standard sidearm for the British characters. The Webley has very high damage from close range but the damage and accuracy is dropped on longer ranges.

The model for the cut British 3rd infantry faction shows a holster with a Webley revolver. Like with other British weapons, it is presumed that the British soldiers would have used it and not a player. 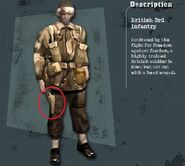 Webley in the holster circled in red.

The Webley was originally intended to appear in the game but was cut for unknown reasons.