Medal of Honor and UndergroundEdit

In Medal of Honor, Walther P38 is used during three levels, The Rooftops of Dachsmag, The Hunter's Den and Dive!. It has short recoil and is a very accurate gun overall. The Walther makes gradually less noise then the Colt .45.

It is the very first side-arm the player starts out with in Underground, supplied by Manon's brother, Jacques. It holds a capacity of 8 rounds, 1 more than the M1911, and it has much greater power and fire rate, making the M1911 essentially inferior. The weapon also appears in Underground's multiplayer.

Walther P38 in Medal of Honor.

Walther P38 in Medal of Honor: Underground
Add a photo to this gallery

Wehrmacht
Afrika Korps
Waffen S.S.
Mike Powell
The Walther P-38 makes it's return in Allied Assault. It is the standard side-arm of the German forces in both singleplayer and multiplayer. In Single player, the Walther P-38 is found in use with German Tanker crew men, German maintenance crews, scientist and Army officers. It can be used by Powell but only through hacking. In Multiplayer, the P-38 is the sidearm of every class in the German team's selection menu. It is a potent sidearm, carrying 1 more round than the Colt, though doing less damage than it due to the weaker 9mm cartridge. The P-38 also appears in both of the expansion packs as well.

Model.
Add a photo to this gallery

Wehrmacht
Waffen S.S.
Matrosen
Luftwaffe guards
James Patterson
The Walther P38 is featured once again and the last time in series as the official German sidearm. It is used by very large number of German soldiers, from harbor workers to MG operators. It is first usable in the level Riding Out the Storm where the player picks one up upon boarding Sturmgeist's train. It is good for getting the player out of a bad reloading situation, though it will perform poorly outside of close range.

Walther P38 in the Remastered edition.

The Walther P38 is only seen used by enemy officers. One shot is able to remove 4 HP from the player and has very low range. 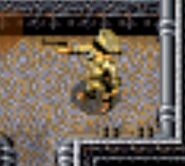 Retrieved from "https://medalofhonor.fandom.com/wiki/Walther_P38?oldid=50235"
Community content is available under CC-BY-SA unless otherwise noted.