Medal of Honor Wiki
Register
Don't have an account?
Sign In
Advertisement
in: Vehicles, Aircraft, American Vehicles,
and 2 more

The Vought OS2U Kingfisher is an American catapult-launched observation floatplane. It was a compact mid-wing monoplane, with a large central float and small stabilizing floats. Performance was modest because of its light engine. The OS2U could also operate on fixed, wheeled, taildragger landing gear.

The O2SU first appears in pearl harbor were it is seen mounted on U.S battleships including the U.S tennessee and Nevada, a US pilot on the west virginia tried to board a kingfisher but it was destroyed by a japanese fighter and he was killed in the explosion.

Some Kingfishers were used in Tarawa possibly to scout positions for artillery fire.

the Kingfisher on the W. Virginia

the Kingfisher after it was destroyed

Kingfisher on the Nevada 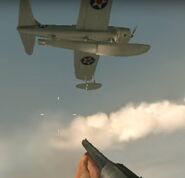 a Kingfisher above Tarawa
Community content is available under CC-BY-SA unless otherwise noted.
Advertisement