Medal of Honor Wiki
Register
Don't have an account?
Sign In
Advertisement
in: Wunderwaffe, German Weapons, Unusable Weapons,
and 4 more

The V-2 (German: Vergeltungswaffe 2, English: "Retribution Weapon 2"), technical name Aggregat 4 (A4), was the world's first long-range guided ballistic missile. The missile, powered by a liquid-propellant rocket engine, was developed during the Second World War in Germany as a "vengeance weapon", assigned to attack Allied cities as retaliation for the Allied bombings against German cities. The V-2 rocket also became the first man-made object to travel into space by crossing the Kármán line with the vertical launch of MW 18014 on 20 June 1944.

The V2 appears in the mission Escape from the V2 Rocket Plant where it is the main objective in the final mission where the player launches the V2 rocket into the air and back onto the factory killing all the Germans inside and destroying their factory.

a rocket on the assembly line 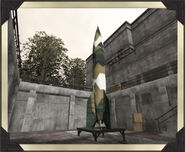 The V2 appears in the 3rd mission of St. Nazaire level Lights Out in the Port City where they are seen in pieces suspended by cranes inside an assembly hangar and they need to be destoyed by shooting them, causing them to crash on the floor.

Rocket also appears in the second mission of North africa Operation: V2 Silence where it is mounted on a train car and needs to be blown up, where many british soldiers arrive and fight some german infantry. William Holt lowers the rocket and plants a bomb on it, blowing up the rocket and also destoying the factory for good.

the fuselage of a V2 in the factory

the V2 as the final objective of operation: V2 silence

V2 appears on the last two missions: the Village and the Base. In Village the player's goal is to intercept V2 rocket, which is located at the railway station. In Base, the player has to sabotage the factory where V2 is produced.

V2 rocket on the railway platform.
Community content is available under CC-BY-SA unless otherwise noted.
Advertisement