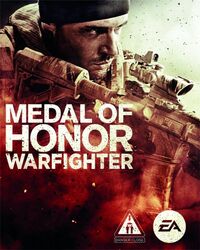 Medal of Honor: Warfighter was released last week. A few critics have weighed in with their thoughts about the game. Here are a few snippets from publications on both the Internet and print. Make sure to voice your opinions on the matter below

No reviewers loved this game.

Thought It Was Okay

Official Playstation Magazine UK
Score: 60/100
"Assuming you can patch it and it works, what you've got here is a basic shooter that, when it remembers what it is, can be fun, and when it forgets, goes mad."

VideoGamer
Score: 50/100
"For a game that's done its utmost to claim the word 'authentic' as part of its hype campaign, Medal of Hono(u)r: Warfighter doesn't feel anything at all like a genuine portrayal of war."

IGN
Score: 44/100
" For the entirety of its brief five-hour campaign, Warfighter spotlights one tired design idea after the other. Each linear action sequence boils down to whack-a-mole with firearms: AI enemies mindlessly pop out from the same cover spots or stand out in the open just waiting to die."

No reviewers have hated this game.

Now it's time for Wikian's to review Warfighter. If you pick up a copy, post your thoughts in the comments or post your own blog!

Retrieved from "https://medalofhonor.fandom.com/wiki/User_blog:Wagnike2/Medal_of_Honor:_Warfighter_-_Review_Roundup?oldid=26147"
Community content is available under CC-BY-SA unless otherwise noted.