The Type 95 Ha-Go is a Japanese light tank used during World War II. It is seen in Medal of Honor: Rising Sun and Medal of Honor: Pacific Assault. It is armed with a Type 94 37mm Main Cannon as well as a Type 91 6.5mm Machine Gun.

In the mission Fall of the Philippines the player must destroy a Ha-Go in order to retrieve a US demolition truck. Later during Midnight Raid On Guadalcanal, the player will be faced with one at the depot. The Ha-Go makes its last appearance in Pistol Pete Showdown. The Ha-Go can be easily destroyed with grenades and machine gun fire not unlike the German tanks in previous games (particularly, Underground and Frontline), a largely unrealistic trait.

Type 95's in the Philippines have green and brown camouflage, whereas Type 95 tanks in Guadalcanal have darker camouflage. 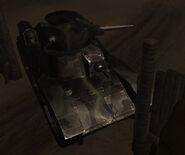