The Type 38 rifle is a Japanese bolt action rifle used by Imperial Japan in World War II. It is featured in Medal Of Honor: Pacific Assault and is seen in Medal Of Honor: Rising Sun, though in the latter one it is not a usable weapon. The Arisaka was adopted in 1905 and served until 1945. The Type 99 rifle was meant to replace the Type 38 but due to the outbreak of the Pacific War never allowed the army to replace the Type 38 and the two rifles served together. The Type 97 sniper rifle is based on the Type 38 Arisaka.

Type 38 Arisaka dropped on the floor.

Type 38 Arisaka with a bayonet dropped on the ground. 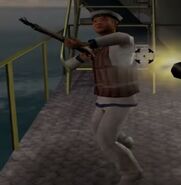 Japanese sailor with an Arisaka

6.5×50mm
The Type 38 is available to be used by the player. It fires 6mm rounds from a 5-round stripper-clip. It does moderate damage, there is a large quantity of ammunition available, but it could be traded out for a more effective weapon. Arisaka has a good accuracy, is very useful in melee attack and is reliable in combat.

Type 38 Arisaka as it appears in Medal of Honor: Pacific Assault.

Melee with the bayonet.