The "Thompson" Sub-Machine Gun was a sub machine gun that was a favored pick for Allied soldiers alike. There are two versions of it that appear in the series, the M1A1 Thompson, and the M1928/A1 Thompson. These two versions of the weapon system appeared in different games of the Medal of Honor series. It's nicknames were Chicago typewriter and Tommy Gun. It often appeared in gangster movies, often with compensator, pistol fore grip and distinctive drum magazine. The military models include the M1928A1, M1 and M1A1 Thompsons.

James Patterson
The M1 Thompson is an American SMG, and is the only one in the game.

It is underpowered, taking about six shots to kill an enemy. It stuns the enemy after getting hit, but enemies will quickly recover and start firing. Thompson also has a great rate of fire, almost double than the other SMG of the game, MP40. It has a tendency to burn through ammo, spending it very quickly. It proves very useful on the level Officer's Quarters against trigger-happy Wehrmacht officers. Thompson can be used as a melee weapon after spending all ammo and takes about 2-3 hits.

In the beta version of Medal of Honor, it was the M1A1 version that was actually cocked like a M1A1. In final version, the Thompson had the M1928A1's reload animation, which had the bolt handle on the top, although it's the M1A1 version.

It's the starting weapon in missions Attack Impenetrable Fort Schmerzen and Capture the Secret German Treasure. It is not present in Medal of Honor Underground, possibly a nod to its hatred by resistance fighters in France, preferring to use captured MP40s and Stens.

The M1928A1 Thompson in Medal of Honor beta.

The Thompson is one of the most commonly appeared weapon in the campaign. On many levels, it is issued to Powell from the start. One notable exception is the first level Lighting the Torch, in which Powell may carry both a Thompson and an MP40 provided he picks up the Thompson first.

Thompson is a fine weapon for close quarter combat. In fact, it was one of the most popular weapons for Allied team players in Multiplayer, thanks to its concentrated damage output (a result of a combination of high rate of fire, relative high damage per shot and tight dispersion at close to mid range) and minimal loss of accuracy while on the move. Its main drawback is reduced accuracy at longer range, but that is a shared trait for SMG class.

Compared to MP40, its German counterpart, Thompson is more powerful and accurate. However, its magazine capacity is slightly lower (30 vs 32 of MP40). This fact, combined with its faster rate of fire, would translate to inferior sustained firepower output and a need for more frequent reloading.

Cpt.Fuches armed with a M1A1 Thompson.

Army Rangers
101st Airborne Division
82nd Airborne Division
James Patterson
In Medal of Honor: Frontline, the M1A1 Thompson is the most powerful version of the Thompson seen in a Medal of Honor game, and is an excellent close quarters weapon. It is possible for the player to kill an enemy with one torso shot, but more commonly it requires two. It's usable only in four levels: Your Finest Hour, Into The Breach, Rough Landing and The Golden Lion.

It's seen used by paratroopers of 101st division in level Seaside Stowaway (it's not usable), by Captain of 2nd Ranger Battalion and Tarver of 82nd division.

In the Remastered Edition of Frontline (PS3 exclusive) it has very high idle sway like the Garand and the ability to use the iron sights.

M1A1 Thompson in the Remastered edition.

Terry Langteau with a Thompson

Thompson is the starting weapon for almost all missions from 3 persons. Three of the shots he's capable of killing ordinary soldiers and 4 shots of the SS soldiers. It has a low range. Along with Thompson, the player is given 10 grenades. 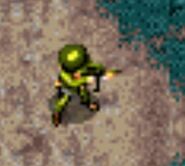 Thompson in Medal of Honor: Infiltrator.

United States Marine Corps
Donnie Griffin
Joseph Griffin
The Thompson is the second weapon that the player is able to use, the first being the BAR. The Thompson has high rate of fire and decent damage, but does run out of ammunition quickly. It is one of the most common submachine guns in multiplayer, and is common amongst many weapon sets. Another thing about this game's Thompson, is that it is now the older M1928 Thompson as opposed to the M1A1 seen in the first four Medal of Honors. In this game, it has a bad habit of spewing out ammo faster than the player can get an accurate hit. It's better at close range, when it kills instantly. It appears in the level Pistol Pete Showdown and is the starting weapon in the level Fall of the Philippines.

In Medal of Honor: Pacific Assault, the Thompson comes in two variants, the M1928A1 Thompson with a 50-round drum magazine, and the M1928A1 Thompson with a 30-round magazine. The Thompson does high damage per bullet, capable of scoring 2 hit kill on many enemies and it has a high rate of fire, coupled with slightly higher recoil than before. These choices make a good mid-range weapon, but players new to the game will often go with the M1 Carbine, a rifle capable at fighting at all ranges. It is also worth noting that the box magazine is faster to reload than the 50-round drum and the 50-round Thompson is slower overall, due to the character having to heave that weight on his arms.

M1928A1 Thompson in a promotional image.

Marine with a Thompson with the "Stick" magazine.

Marine with a Thompson with the "Drum" magazine.

No. 2 Commando
101st Airborne Division
28th Infantry Division
William Holt
In Medal of Honor: European Assault the Thompson comes in two variants: the singleplayer variant with a 20-round magazine, and the multiplayer variant with a 30-round magazine. The Thompson in singleplayer can be found on every level in St. Nazaire mission but is replaced by the PPSH-41 in the Stalingrad theatre and the BAR in the Battle of the Bulge theatre. It's also usable in level Farmhouse Liberation. With medium damage, low recoil and open iron-sights, the Thompson is a very capable weapon, but sometimes it's rate of fire can vary from high to low, resulting in the player not being able to engage hostiles as hoped. The MP40 seems to have a better suited rate of fire for the Thompson to have, and vice versa as the real Thompson fires about 800 rounds per minute, but the game displays the Thompson to have closer to 500 rounds per minute. However, the real MP40 fires about 550 rounds per minute, and the game has the MP40 firing closer to 700-800 rounds per minute.

The European Assault multiplayer variant is identical to the singleplayer Thompson, but has a 30-round magazine and a lower rate of fire, allowing the player to have a better chance at medium-range yet suffers at close range. Compared to the MP-40, the Thompson has higher damage yet a lower rate of fire and a smaller magazine (30 rounds compared to the MP-40's 32-rounds).

British Commando with a Thompson

In Medal of Honor: Vanguard, the Thompson is very common amongst US paratroopers, and is a starting weapon on missions Off Target, Der Bunker and Haunted. The weapon can be upgraded to use a 50-round drum magazine instead of the standard 30-round magazine. It is the same version from European Assault.

In Vanguard multiplayer, the Thompson can be found near the US starting spawn, and has similar stats to the singleplayer weapon. In combat, the weapon performs on a similar level to the MP40.

M1928A1 Thompson equipped with a 50 round drum magazine.

82nd Airborne Division
17th Airborne Division
Boyd Travers
The Thompson is a selectable weapon in Medal of Honor: Airborne. It is a very good weapon to have at the beginning levels. While it has some advantages over the MP40, like a higher rate of fire, more power, the MP40 beats it in some aspects like better ironsights, a more controllable rate of fire, lower recoil and larger magazine. However, the Thompson's upgrades significantly improves the Thompson's performance over the MP40, which can make it slightly better, but even with that said, a fully upgraded MP40 will outclass even a fully upgraded Thompson (except trainer version of the Thompson).

The Thompson in Medal of Honor: Airborne 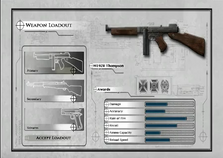 The Thompson's stats in the weapon load out screen. 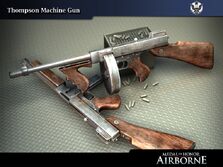 Thompson in a promotional image.

John Baker
James Patterson
William Holt
John Berg
Army Rangers
101st Airborne Division
The Thompson makes a return in Medal of Honor: Heroes and it's sequel Heroes 2. The Thompson is usually the starting weapon in most levels, except a few one where it's replaced by the M1 Garand or the BAR. It is a common amongst allied soldiers. The Thompson has medium damage and good from close to medium range. However the MP40 has a superior magazine capacity and higher rate of fire, so it might seem a good replacement. In both Skirmish and Multiplayer the Thompson can be choosen as a starting weapons and shares the stats from the campaign. It is a good weapon to kill enemies from close range. The weapon model is the same from European Assault and Vanguard.

In Heroes 2 the Thompson is the starting weapon most of the levels except Sewers where it's replaced by the M1 Garand and the last level Base where it's replaced by the BAR. Allied soldiers use the Thompson as their weapon of choice most of the time. It shares the stats from the previous game. The model has been modified and retextured, resembling the Thompson found in Airborne and the sounds have been replaced as well. It can be choosen as a starting weapon for allied soldiers in multiplayer. 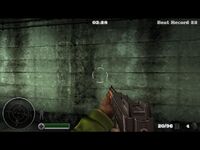 The Thompson in Medal of Honor: Heroes. 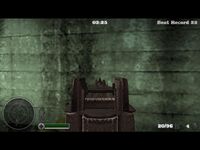 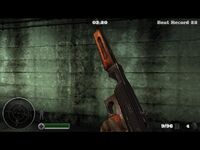 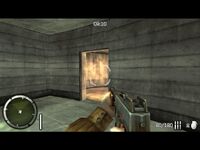 The Thompson in Medal of Honor: Heroes 2. 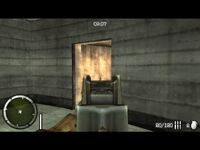 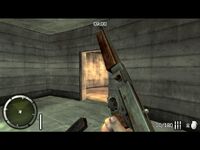 Medal of Honor: Above and Beyond[]

The M1A1 Thompson appears in Medal of Honor: Above and Beyond, it was first seen on the reveal trailer when the player uses music to signal an attack and in the story trailer on D-Day

The player inserting a magazine with a shaky hand

The player reaching for the charging handle

Pulling back the handle