Special Cargo is the second level of A Storm in the Port, the second of six missions in Medal of Honor: Frontline. It takes place on the German submarine U-4902.

Aboard U-4902 near Lorient, France

Bonjour Monsieur Patterson! My name is Fabrice, and I am one of the many proud French citizens fighting against the occupation for over four years now. I believe you know my trusted friend, Manon. Her brother and I were great allies before he was killed two years ago in the Academy of Music ambush. When Colonel Hargrove informed me he was sending one of his agents for this mission, I was pleased to hear your name.

I hope you didn't have trouble finding your way through the village—or whats left of it. If you're reading this note, then the resistance drop I left for you was intact.

I have new information for you. Since U-4902 reached St. Mathieu, we have learned that the Kriegsmarine have plans for shore leave at Lorient. It is not a long journey, so sit tight until the U-boat begins docking at the port.

I hate to say this, but there won't be enough room inside the crate to fit your rifle, and I suggest you leave your grenades behind too—you wouldn't want one of those going off in a pressurized U-boat! However, you'll be glad to hear that in addition to the standard provisions brought on board, such as food and medical supplies, they're also carrying munitions and explosives. To scuttle the U-boat, plant a few timed charges in her torpedo rooms, set to explode after you escape. Then disable her engines and destroy the radio to keep anyone from alerting the docks.

If you're really lucky, Jimmy, you may even come across additional weapons and the prized enigma book. We can review any further instructions once you have reached the shipyards.

German Sailor 1: "Dang! That crate was heavy! What does Scharff have in there . . . marble?"

Patterson exits the crate and quickly dispatches the two sailors, then grabs an MP-40 off of a crate.

German Sailor 3: "It's Gunther. Onions don't agree with him." (laughter)

Jimmy kills a sailor that is using the submarine's bathroom and kills more sailors in the eating area and kitchen, with a chef hurling knives at Jimmy, Jimmy then shuts off the steam blasting from the pipes by turning red valves on the sub while still killing more sailors, then comes across the engine room full of mechanics

German Mechanic 1: "That seal will not withstand that much pressure".

German Mechanic 2: "Yes it will! I welded it myself."

Jimmy places a demolition charge on the engine. After it explodes, a hole is opened up, allowing him access to the upper level. Two sailors are trying to figure out a way to surprise him.

German Sailor 5: "What are we waiting for then?"

Those two sailors are killed as Jimmy places a demolition charge on one of the torpedoes in the room.

Jimmy easily dispatches these mechanics and comes across the control room with Captain Scharff giving commands to his assistant, as the U-boat is being docked.

As soon as the sub is docked, Jimmy kills Captain Scharff and his assistant, then destroys the radio link to the dock. Jimmy kills two more sailors in the Captain's quarters before coming to the second torpedo room at the front of the sub.

German Sailor 6: "The only that makes loading those torpedoes worth it . . . is launching them."

Patterson kills off the rest of these sailors and then plants a final demolition charge on one of the torpedoes in the room. As he makes his way back, a single officer leaves his bunk. Once he is dead, Jimmy grabs the Enigma code book and climbs the ladder to the hatch of the sub to leave.

During this mission, Jimmy Patterson must Sabotage the German U-Boat to as it reaches the port of Lorient, which seems to be the Most secure U-Boat dock the Nazis have that is currently in France. Sabotaging the U-Boat would be part of an operation that would cripple the Nazis' U-Boat Production and Deployment. To sabotage the U-Boat, Patterson had to Disable the U-Boat's engine, Disable the Radio to prevent backup from arriving, and then plant demolition charges in the 2 Torpedo rooms, which would soon detonate in the beginning of the next mission, Eye of The Storm. 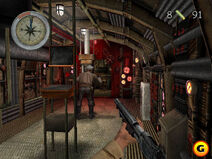 An early screenshot of the level featuring a trench gun 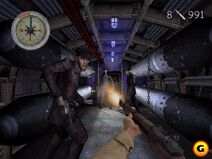 Another early screenshot which depicts a crew member carrying a Mauser C96 pistol (a weapon that was apparently cut from the game)
Add a photo to this gallery
Retrieved from "https://medalofhonor.fandom.com/wiki/Special_Cargo?oldid=47705"
Community content is available under CC-BY-SA unless otherwise noted.