The Lee-Enfield appears in Allied Assault in the 2 expansion packs, Spearhead and Breakthrough. The Enfield in-game is modeled after the updated 1941 model of the SMLE, the No.4 Mk. I.

The Lee-Enfield is a weapon usable in Spearhead's first mission "Welcome to France". The player receives it when they meet up with a trio of British Commandos who inform the player of scattered 101st Airborne paratroopers, who give them a Lee-Enfield, a Sten Mk. V, and an Webley Revolver.

The Lee-Enfield does as much damage as the Karabiner 98 Kurz, but with the highest magazine capacity of all bolt-action rifles, it is essentially the best bolt-action rifle in Spearhead. In Breakthrough, a scoped version appears, in the form of the anachronistic L42A1. It is very effective against enemies, but it has somewhat higher recoil than the unscoped version, the standard Enfield, however, can only be used in singleplayer by either cheats or editing the game-files.

In both Spearhead and Breakthrough, the Enfield is used by British forces as their main rifle. It is a 1-hit kill to the head and chest, 2 to the torso, and 3 hit kill on the limbs, and the capacity of 10 rounds for a bolt-action of such power; these qualities make this weapon the best bolt-action rifle in multiplayer. The scoped L42A1 is used by the British as their sniper rifle in Breakthrough only.

The Lee-Enfield as it appears in Medal of Honor: Allied Assault.

Inserting one of the 5 round stripper-clips.

Lee-Enfield placed down in the boat.

In Medal of Honor: Frontline, the Lee-Enfield can be seen being used by the British paratroopers in Arnhem Knights, but is unobtainable by the player. Although the paratroopers seem to use a bolt, there is no handle present on the rifle.

Lee-Enfield in the hands of a British Paratrooper.

The Lee-Enfield in Medal of Honor: Rising Sun is used only by Allied NPC's; one of them is seen used by real-life guerilla fighter Martin Clemmens on Guadalcanal in the mission Pistol Pete and by other native guerilla fighters against IJA (Imperial Japanese Army) forces. 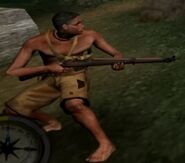 SMLE in hands of a guerrilla fighter. 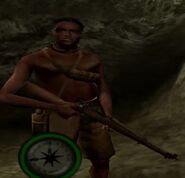 Only appearing in the North African campaign as one of the starting weapons, the SMLE has great accuracy, range and stopping power, and is equipped with a scope. The Enfield is a good weapon to sniper enemies from a long range. Enfield has 5 rounds in it's magazine unlike in real life where the Enfield has 10 rounds in it's magazine. This may be done to balance out the weapon.

7th Armoured Soldier with the SMLE.

James Patterson
William Holt
The Enfield returns in Heroes and it can be picked up in a couple of levels througout the campaign. It appears in multiplayer/skirmish mode as well as a selectable starting weapon. Usually takes 2 shot to kill an enemy, one shot if it's on low health or a headshot. It holds only 5 rounds making the Gewehr-43 a superior weapon with twice as much ammo in the magazine. The Enfield uses the M1 Garand's sounds even the *ping* sound in reload.

In Heroes 2 the Enfield is replaced by Springfield which is a modified and retextured version of the Enfield's model.

SMLE in Medal of Honor: Heroes