Shahikot Mountains is a multiplayer map in Medal of Honor (2010). It is available in the Combat Mission and Hot Zone game modes. The map features rocky terrain with a wide valley down the middle, making control of the high ground highly important in both offense and defense.

A Chinook helicopter crash-landed in the Shahikot mountains. Python 1 was sent in to investigate, but were ambushed by Taliban fighters. The ensuing firefight takes place throughout the valley, with Python 1 attempting to destroy the Opposing Forces's anti-air guns in the area. If they manage to defeat the Taliban, then the AA guns are destroyed. However, if the Opposing Forces manage to keep Python 1 from breaking through their defenses, Python 1 is eventually pinned down, their exfil vehicle, a CH-47 Chinook, is destroyed, and they are overrun.

The wrecked Chinook helicopter is the first objective for Python 1, and is a Secure Area objective. The terrain around the Chinook helps both the Python 1 and Opposing Forces, as their snipers and gunners can hide in the rocky terrain to the sides of the Chinook and attack the Coalition without being seen, but if the Coalition can get men to the Chinook then its armored sides can provide very effective cover.

As with most first objectives, speed is essential in securing the crash site. The terrain generally favors the Opposing Force team more as they can quickly control the high ground on all sides of the Chinook, while Python 1 must either go through the low-ground bottleneck or approach via the highly-exposed ridge. Covering the area with smoke grenades will allow the Python 1 to reach the safety of the wreck, while a simultaneous assault on the high ground on the right of the Coalition starting point will keep the Opposing Force from closing in on the attackers. However, if the Coalition attack stalls or too many players choose to play as Sniper, it becomes nearly impossible to dislodge the Opposing Force team, who can set up vicious crossfire arcs.

A risky but effective opening strategy for the Coalition is to get one or more Rifleman to quickly sprint to the Chinook and hide inside. As long as they stay out of view, the lead elements of the team are safe from gunfire, although they can be dislodged with grenades and indirect fire support. Having one person in the Chinook gradually secures the objective while offering a forward spawn point for team mates.

The Opposing Force can also attempt this to counter the rush by sending of their own into the Chinook. There is a small window that looks directly towards the low approach the Coalition must use. Attackers often do not realize if someone is in the Chinook and are picked off easily. However, hiding in the Chinook is vulnerable to attackers coming from the high ground, as they have a direct line of sight down the fuselage of the helicopter.

The ammunition dump is the second objective, and Python 1 must plant a charge on the ammunition to progress. The ammo dump is located in a cave approximately 90 meters from the Chinook, with two entrances to the rear and the right side of the cave (from the Coalition perspective). Behind the cave are a string of rocks along a ridge, where Opposing Force snipers (and Python 1 snipers for the next objective) can take out hostiles with good cover. A path to the left (from the Coalition's view) is also present, but will often find itself the subject of heavy firefights.

There is a small hole in the roof of the cave, which can allow a player to swiftly drop onto the objective and arm the charge without having to go through the kill zones that surround the two entrances to the cave. Players can also hide behind the charge, popping up to eliminate defenders disarming the charge. This is highly useful as it allows the attacker to survive all ballistic fire, and only be dislodged by a grenade or RPG. Opposing Force snipers can find planting a charge behind this point, and retreating to a hiding spot away from Python 1 snipers is a useful tactic to flush out attackers.

Commonly, the battle becomes that of two forces: Two different Python 1 forces will create themselves, those that like attacking up the right flank, over the exposed rocks to counter-snipe the Opposing Force defenders, and those that attack up the left flank, holding the covered pathway and dropping down on the objective.

Like the previous base (and most other bases in the Combat Mission game mode), Python 1 needs to complete this objective quickly, as a faltering force commonly results to using the Sniper class to get personal score and not complete the game.

The third objective for the Coalition is a Qualat, a small compound. Here, a charge must be placed on another ammunition cache. The charge is located under a canopy, which blocks all ballistics, inside the main courtyard. The Opposing Force spawn base is located in rocky outcrops near to the Qalat, yet many players find it easier to defend the base from the rocks overlooking the buildings.

The Coalition's best bet in this base is to infiltrate through the buildings and attack the objective in force, arming the charge as soon as a player can. By doing so, the Coalition can put lots of fire down on the objective, making it difficult for Opposing Force players to disarm the charge. Other attack methods comprise of snipers hitting the rocks overlooking the base while Spec Ops and Riflemen carefully clear out any Opposing Force infantry out of the Qalat, before arming the charge. Due to the nature of the terrain, Coalition snipers can find that trying to take out Opposing Force in the rocks above the Qalat can be difficult, exposing themselves to fire from defending forces, which have ample access to protective firing points.

For the Opposing Force, the best place to mount a defense is in the Qalat itself. Carefully placed Spec Ops players with Carbines or the MP7A1 can hold off attacking Coalition forces via the bottlenecks in the terrain, while Riflemen with Assault rifles can cover them if in need from the buildings themselves. Snipers are best employed as ambushers, placing IEDs in positions where an explosion would heavily damage Coalition forces, and then place themselves to pick off attackers when the chance arises.

The Mortar base is the penultimate base for the Coalition to attack. The mortar is located in a destroyed house, and a charge must be placed to destroy it. A rock ledge overlooks much of the area around the mortar, and two paths lead to the Opposing Forces spawn, which can come under heavy fire from Coalition Support Actions and grenades. This objective is often the breaking point of an average Coalition team, as the approaches are again heavily limited. Coalition attacks will often have more success securing the left approach, as the right one is easily covered.

This objective is effectively the last chance to make a stand, as the AA Gun following this objective is difficult to set up a perimeter around and the Coalition will rush it to end the game.

The AA gun is the final base for Python 1 to take. The AA gun is located in a small house. The faction is funneled into one narrow approach, but again have some path options high and low. As long as Python 1 squad mates keep running to this objective immediately after the Mortar, they should be able to blow this objective and win the match. The Opposing Force spawn is behind a wall some distance away from the AA Gun, making it hard for the Opposing Force to dislodge the attacking team. 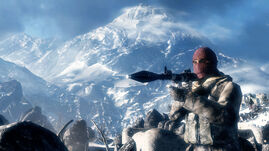 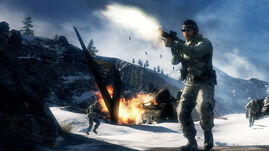 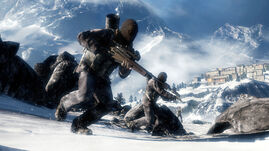