"The TOC (Tactical Operations Center) has lost contact with Neptune and Wolfpack is three mountains away. With time running out, there is only one option--send in the QRF (Quick Reaction Force). You once again step into the boots of Ranger SPC (Specialist) Dante Adams and are inserted on top of Takur Ghar to find Neptune."
— Missions Menu Description

Rescue the Rescuers is the tenth and last level of Medal of Honor (2010).

A Chinook carrying Dante Adams, Patterson, Ybarra, Hernandez, and the balance of Ranger Platoon Bravo 1 is redirected from Gardez and inserted onto Takur Ghar in order to rescue the four members of AFO Neptune. However, as the helicopter is landing, RPGs and heavy small-arms fire damage the helicopter and causes it to crash land, with several wounded and killed in action. Adams is told to man the M134 minigun in the Chinook to suppress the Al-Qaeda attackers while the rest of the unit sets up a defensive perimeter outside.

Once the enemy attack falters, Bravo 1 disembarks and counterattacks the well entrenched AQ on foot. As the fire team advances, they come under fire from a bunker, but, with a SOFLAM designation from Adams, Ybarra calls in a pair of F-15E Strike Eagles to destroy the heavy machine gun position. The squad then continues advancing up the mountain, coming under fire from another bunker, and again Adams designates the bunker for destruction by the F-15Es.

Hernandez discovers a cave entrance covered by corrugated iron and is shot and wounded when standing silhouetted in the entryway. Ybarra escorts Hernandez back to the LZ for medical attention while Patterson and Adams push into the cave, meeting with heavy resistance. As they exit the other side, the Rangers link up with Preacher and Voodoo and continue to search for Mother and Rabbit together.

The four shooters engage more Al-Qaeda and Chechen Mujahideen forces and make use of a CIA Predator to destroy a fortified machine gun position guarding another cave entrance. Inside the final cave, the four Tier 1 shooters find Mother and Rabbit who are escorted back to the rendezvous point by the Rangers' crashed Chinook. Mother, though injured, checks on Rabbit, who is in critical condition due to wounds received escaping from the Al-Qaeda ambush the night before. Voodoo, Preacher, Mother and Sgt. Patterson try to keep him awake and focused. The evac Chinook had to be redirected from Kandahar Airbase, and, due to a lack of emergency medical treatment, Rabbit passes away while still waiting for the Chinook to arrive. In the helicopter, Preacher takes Rabbit's lucky charm, a rabbit's foot, while Mother exclaims that this is not how their war will end. Preacher agrees.

The final scene shows Preacher and Someone small talk until they notice a man passing them in the street - their target. They confirm his identity and stand to approach him. 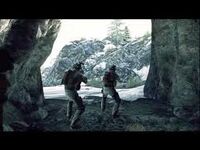 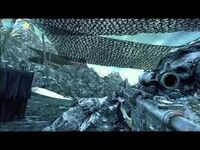 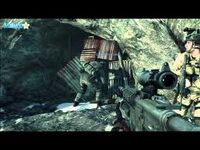