Medal of Honor Wiki
Register
Don't have an account?
Sign In
Advertisement
in: Cleanup, Medal of Honor (2010) Weapons, Attachments

The Reflex sight is an available attachment for all primary weapons in Medal of Honor (2010).

The two available Red Dot Sights are the EOTech and the Aimpoint sight red dot.

The EOTech Red Dot sight is cuboid and has a single red dot with a circle and crosshairs around it. It is the most common Red Dot, and is available both on Deuce's MP7A1 PDW as well as Rabbit's M4 in the later missions. On some weapons, such as the MP7A1, aiming down the sight will actually zoom out, rather than magnify.

The Aimpoint Sight is a transition between the Combat scope and the EOTech, having a scope-style look but a single dot in the centre of the player's vision. It is more bulky than the EOTech, but provides a better magnification. It is only available in First In on Rabbit's M4 CQBR

There are two available sights in the Multiplayer of Medal of Honor (2010): the EOTech Red Dot and the Kobra Red Dot.

The EOTech is the Red Dot sight available for the Coalition. It is similar to the sight in the singleplayer, but is larger on the screen and does not have a well-defined outer shell on the actual unit. The outer ring of the sight is less visible than in the singleplayer, aiding longer range shooting, and the Red Dot is better defined. It is available on all of the Coalition's primary weapons, including the MP7 and the M60.

The Kobra is available to the OpFor, and is, apart from appearance, the same as the EOTech. It is smaller and slightly more cluttered, but performs in exactly the same way as the EOTech. Similar to the EOTech, there is a thin black reticle around the actual dot.

Render of the EOTech Sight.

Render of the Kobra Sight. 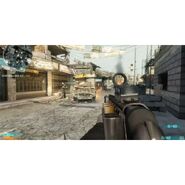 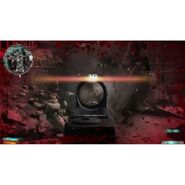 Aiming down the Kobra Sight on the AKS-74u carbine. 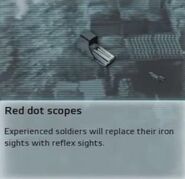 View through the Red Dot Sight (on the M249) in the Announce Trailer for the game.
Community content is available under CC-BY-SA unless otherwise noted.
Advertisement