"Rabbit" was the callsign of a veteran Tier 1 counter-terrorism operator with AFO Neptune.

Rabbit was involved in several operations throughout his service in the War on Terror. These include rescuing an Afghan informant by the name of Tariq in the town of Gardez. Upon arrival in the town, Rabbit is criticized for his taste in music by fellow operator Voodoo. Neptune then comes across a checkpoint where they are informed that local Taliban forces have pulled out. Team leader Mother, suspicious of the situation, tells his men "keep your fingers on the triggers." They move further into town where they are ambushed by Chechen Al-Qaeda and Taliban forces. Rabbit and Voodoo get separated from the team and have to fight through heavily occupied Gardez to link up with the rest of their unit. After linking back up, they engage the enemy several more times before securing "the package" located on the other side of the Bala Hesar fortress.

Later, he was with Neptune and the ANA, assaulting Bagram Airfield, capturing an air control tower, and later destroying targets of opportunity in the Shah-i-Kot Valley from said air tower.

Six months later, Rabbit along with the rest of AFO Neptune and AFO Team Wolfpack are still in the valley. They train a small militia group, Task Force Rebel, however the group later panics and retreats after being (accidentally) hit with friendly fire under General Flagg's orders.

AFO Neptune proceeds to make their way up the mountain, receiving support from Reaper 31. Once going through the town, Rabbit gets knocked down and face to face with the barrel of an enemy's AK47, but before Rabbit is executed, Mother shoots the enemy through the head. AFO Neptune then proceeds to help Reaper 31 by destroying enemy gun emplacements and enemy RPGs. Rabbit also destroys a large ammo cache.

Several hours later, AFO Neptune becomes overrun by insurgents, receiving sniper support from AFO Wolfpack members Deuce and Dusty, they proceed to fall back down the mountain, going down a similar path they just cleared hours earlier. They call for a helicopter evac, but only Mother and Rabbit are able to be safely evacuated, and they leave Preacher and Voodoo behind.

But the hut turns out to be a trap, several enemies open fire while Mother and Rabbit are trapped and surrounded. After a huge explosion with the hut now as rubble, Mother drags Rabbit and he (Rabbit) kills multiple enemies before Mother drags him through a hole in the hut's wall. Mother then quickly checks to see if Rabbit was hit when the latter is nearly hit by an RPG blast. Mother and Rabbit attempt to run from the enemy when Rabbit is suddenly shot in the back which exits through his chest and he collapses, resulting in internal injuries. After Rabbit briefly recovers from the gunshot he and Mother reach a cliff where Mother asks Rabbit "Bullets or broken bones?" before answering "Bone's heal, let's do it!" and jumping off the cliff, Rabbit follows. At the bottom of the cliff Mother and Rabbit are lying in the snow injured with a group of enemies moving to inspect/capture them. After Colonel Drucker gets eyes on a group of enemies who have captured Mother and Rabbit, not being able to tell Mother and Rabbit from the enemies, Panther suggests a way to distinguish Mother and Rabbit from their captors which is to fire warning shots near the group to see if two (Mother and Rabbit) break away to escape, the plan works and the pair are able to escape the enemy for now. After a brief argument with General Flagg about what to do Jimmy its the call between the two. This allows Colonel Drucker to send the in QRF to rescue them (Mother and Rabbit).

The 1st Ranger Battalion's Quick Reaction Force (QRF) manages to rescue AFO Neptune, including Rabbit and the other missing SEALs, but Rabbit soon bleeds to death; due to the gunshot wound to his chest and back before the CASEVAC helicopter arrives.

The last scene featuring Rabbit is of him in the Chinook covered by a blanket, his rabbit's foot is taken by Preacher. Mother then says "This isn't how this ends." Preacher responds with "No...It isn't."

Rabbit's outline in the cutscene "Waiting for the Dinner Bell" 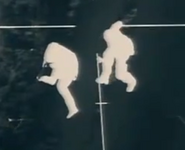 Another thermal of Rabbit and Mother. 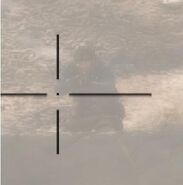