The RPK is a Soviet light machine gun developed from the AK-47. The RPK was developed in the late 1950s as a standard light machine gun for the Red Army and as a squad support weapon. The RPK has a similar design layout to the AK-47 and AKM series of rifles, with modifications to increase the RPK's effective range and accuracy, enhance its sustained fire capability. In 1974 the RPK-74 was developed from the AK-74 which is still in service with the Russian Army along with the RPK-74M.

The RPK is only available in the multiplayer for the OpFor. It shares many of its features with the AK-47, although it has a drum magazine. It is only obtainable through a PC digital preorder, similar to the M240. It has a slow reload and medium recoil. It is available for the rifleman class.

The RPK in gameplay. 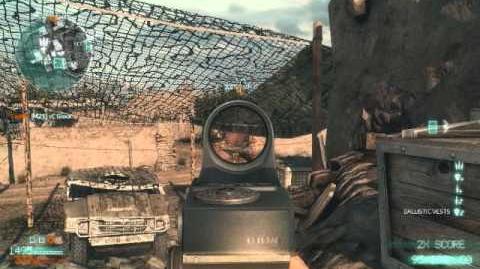