Republic of Korea or South Korea

"This Special Forces unit is Part of the Republic of Korea Naval Special Warfare Flotilla. This unit is heavily modeled after the US Navyʹs SEALs in training and tactics. They have already proved their skill in a number successful maritime hostage rescues. Although they have many strengths, they have some of the best snipers in the world."
— Battlelog Description

The Republic of Korea Naval Special Warfare (UDT SEAL) is a special warfare unit of Republic of Korea Navy. The flotilla is also known as ROKN UDT/SEALs, because UDT/SEALs is the most publicly known branch of the flotilla. ROKN UDT/SEALs are heavily influenced by the United States Navy SEALs, which initially provided funding and expertise in the unit's creation, and still maintain a strong relationship by regularly undertaking joint cross training (JCET) several times a year, utilizing US helicopter and submarine assets, and enrolling students each year in US Naval Special Warfare programs such as BUD/S and EOD school.

They are the Tier 1 faction featured in Medal of Honor: Warfighter for South Korea. 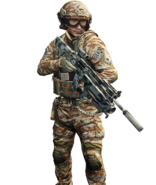 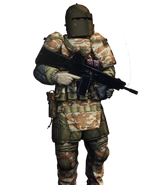 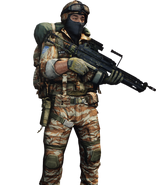 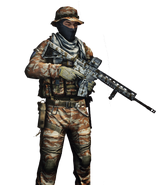 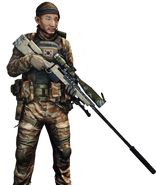 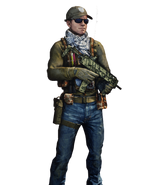 UDT Special Ops
Add a photo to this gallery
Retrieved from "https://medalofhonor.fandom.com/wiki/ROKN_UDT/SEAL?oldid=29341"
Community content is available under CC-BY-SA unless otherwise noted.