Medal of Honor Wiki
Register
Don't have an account?
Sign In
Advertisement
in: Medal of Honor: Allied Assault vehicles, Bombers, Vehicles,
and 3 more

PE-8 (other designations TB-7 and ANT-42) — Soviet four-engine long-range heavy bomber (sometimes classified as strategic) during the Second world war. The aircraft was developed as a high-speed high-altitude long-range heavy bomber. The principles laid down in its basis made it possible to use the aircraft for military transport purposes: transportation of cargo and personnel (50 people with full equipment) at a range of up to 2000 km. According to the composition and location of the airborne small arms defensive aircraft refers to the then existing conditional category "flying fortress", by analogy with the American bomber Boeing B-17 Flying Fortress.

A large squad of Petlyakov PE-8  bombers apepar at the end of the mission Return where they fly over the play as the camera pans into the distance.

Another group of bombers. 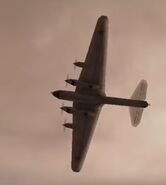