The Panzerschreck is a shoulder-fired anti-tank rocket launcher. The weapon is reusable, and fires rocket-propelled, fin-stabilized, shaped-charge rockets. It provides a stark contrast to the Panzerfaust, which was a disposable, one-use weapon. The Panzerschreck is based on the US M1 Bazooka.

The Panzerschreck appears in the original Medal of Honor. It first appears in the level Heavy Water and later in the mission Capture the Secret German Treasure and in the level Götterdämmerung, but only for enemy use and cannot be picked up by the player; instead, the player can use the M9A1 Bazooka, which performs the same way. Panzerschreck's design is really simple: bluish barrel with a metal pistol handle. Sometimes, when killed, users will fall and will accidently activate the rocket, so it will explode under them. Because they are already dead, Germans won't change their body position.

In Medal of Honor: Underground, the Panzerschreck appears in the level Final Uprising and later in the levels Operation Marketplace, Where Beagles Dare, and I, Panzerknacker.

In Medal of Honor: Allied Assault, the Panzerschreck first appears in Mission One, "Lighting the Torch", where a German soldier uses it to destroy one of the Allied trucks in the beginning of level "Rangers Lead the Way". Later, in level "Lighting the Torch", during the airfield ride it's used by German troops who attempt to destroy the player's jeep. In Mission Three, "Operation Overlord", the player picks it up in the beginning of level "The Nebelwerfer Hunt" to destroy the halftrack and the Tiger tank later in the level. It also appears in Mission Five, "Day of the Tiger", used by German troops to destroy the player's King Tiger tank. Like Bazooka it can be used in all levels by using cheat codes to unlock all weapons and unlimited ammunition, but in some levels where is not scripted to appear, the sound from firing the weapon will not be heard; also, while not officially appearing in expansion packs, the weapon can be spawned by using the same cheat. The weapon is deadly against German troops and enemy vehicles and can be very useful in several missions. 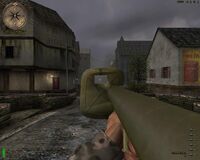 Panzergrenadier
Panzerschreck Squad
James Patterson
In Medal of Honor: Frontline, the Panzerschreck is only found being carried by Panzergrenadiers. It is first seen when an officer fires one to destroy the truck James Patterson is riding on in the level The Golden Lion. A squad of troopers carry them in Arnhem Knights. These soldiers also have backpacks with extra rockets, and their weapons can be used against a panzer further in the level. Some soldiers are armed with it in the last three levels of the game. Finally, it can be found in the level Riding Out the Storm, and can be carried until the end of Derailed!. It's cumbersome sighting system make it a difficult weapon to use compared to the M9A1 Bazooka. Actually, it doesn't even have aiming feature, forcing the player to use the small peep sight with head turning stick on joypad. Panzershreck can be used longer when activating cheat code for unlimited ammunition and can be deadly against German troops.

Panzerschreck in Medal of Honor: Frontline

Soldier with a Panzerschreck 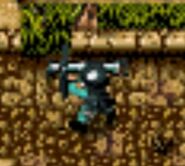 Panzergrenadier armed with the Panzerschreck.

Panzergrenadier
Boyd Travers
The Panzerschreck is the most common anti-tank weapon found in Medal of Honor: Airborne, and is not as powerful as its American counterpart, the M18 recoiless rifle, but can be just as good for knocking out tanks. It is used by Panzergrenadier infantry. Along with M18, the weapon can be used in all levels by using cheat codes for all weapons and all ammunition, very useful in firing against German troops, but is only applied to PC version.

A dropped Panzerschreck on the ground. 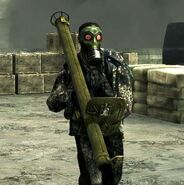 panzergrenadier with a panzerschreck

In both games the Panzerschreck incorrectly uses the M9A1 Bazooka's model from Medal of Honor: Vanguard. It functions the same as the M1 Bazooka, the only difference is that the M9A1 has a scope.