"It's find the bad guys, kill the bad guys. It doesn't work real well the other way around."
— Panther

Panther is the team leader of AFO Wolfpack and like the rest of the team, he is a veteran operator of 1st Special Forces Operational Detachment - Delta (Delta Force). He is only physically seen a few times, but he can be heard over the radio throughout most of the campaign missions that feature Deuce. In addition he is also mentioned many times in the in game's cut-scenes and missions alike.

Panther is first seen at the end of the first mission, then again in the mission "Running With Wolves", briefing the rest of AFO Wolfpack on their mission. He and Vegas split off from the rest of the team and head for a small Taliban occupied village. While Dusty and Deuce traverse the terrain on ATVs heading for the first village. Panther informs the team that a number of trucks are inbound and that they "were riding low, probably full of supplies and weapons". He orders the team to wait and develop the situation.

Upon arrival at the first village, Panther and Vegas enter at the opposite end of the compound. Dusty and Deuce provide sniper support while the team infiltrates the village. Panther meets up with the rest of his team in a house recently secured after a brief firefight within the village walls. Delta captures vital enemy intelligence and maps showing possible signs of enemy locations in the mountains. Panther calls it in to Command to inform them of the changing situation. Command informs him that General Flagg wants to deploy the Rangers immediately. The veteran team leader strongly advises against this informing command that the Afghan fighters, callsign Task Force Rebel, are in position to move and asks Command to stall the General. As they head for OP Clementine, another Taliban occupied village is encountered and Panther calls it in to Dusty. Dusty informs Deuce to get the .50cal out and to neutralize targets from a distance to ensure safe passage for Panther and Vegas. Upon regrouping at Clementine, Panther orders the ATVs hidden and booby-trapped. Soon afterwards, they begin calling airstrikes on Taliban positions.

Panther is next seen in the mission "Friends from Afar". He spots a few targets along the mountain ridge for Deuce and Dusty before heading further up the mountain to engage more Taliban fighters.

Panther is in the mission Neptune's Net but only says one line: "Jimmy, this is Panther. Those SEALs cannot set down there; that area is hot." 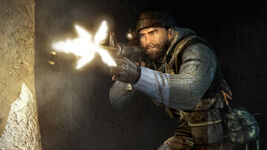 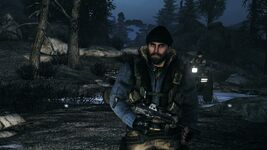