The PKM is a Soviet, belt-fed, 7.62x54mm light machine gun that appears in Medal of Honor (2010). The round it shoots is also used by the (SVD) Dragunov Sniper Rifle found in Prologue level First In. The PKM is related to Soviet/Russian Pechneg PKP Pechneg. By machine gun wise it is the M60 used by Voodoo in Compromised which is later given to Rabbit .

Automatic
The PKM in Medal of Honor boasts low accuracy, a high rate of fire, and high upwards recoil. It is the second weapon unlocked for the Insurgent Rifleman class. It can be very effective against closely-grouped enemies and laying down suppressive fire, but its primary limiting factor is its long reload, which leaves the user vulnerable for several seconds in between belts. The PKM is used by Rabbit in Prologue level Breaking Bagram and can be found throughout the campaign.

The PKM in single player.

Veteran version of the PKM.

The PKM can be seen in various promotional images but not in the actual game, although the PKP can be fitted with the PKM's furniture. 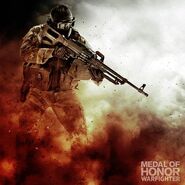 PKM in a promotional image.