Medal of Honor Wiki
Register
Don't have an account?
Sign In
Advertisement
in: Vehicles, Aircraft, American Vehicles,
and 2 more

Bell proposed a "Cobra" of England and France. The export version received the p-400 index and in April 1940, the British arms purchase Commission signed a contract with Washington for the supply of a new aircraft to the Royal air force. However, the English pilot flew for the first time "Airacobra" only eight months. Engineers of the company "bell" did everything possible to make their plane like overseas allies.

The P-400 was stationed in Guadlcanal on Henderson Airfield.

When the player arrives at the airfield an Airacobra can be seen in the hangars.

During the Japanese attack on henderson airfield P-400s were launched to fight back the bombers, most were destroyed by Japanese zeroes and the rest were targetted in their hangars by Val dive bombers.

Some Aircobras can be seen on some multiplayer maps dogfighting with Japanese zeroes.

An Airacobra at Henderson. 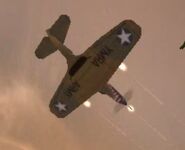 Airacobra in the sky.

An Airacobra in the multiplayer map "Wake island". 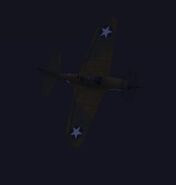