Riding Out the Storm

On Track is the first level of Rolling Thunder, the fifth mission of Medal of Honor: Frontline. It takes place in the German city of Emmerich, where Jimmy needs to board a train to follow Sturmgeist to the secret jet production facility.

Welcome to Emmerich, Jimmy. Take one last look around. Come dawn, there won't be much left. Now, Emmerich station is just outside your hotel window. Sturmgeist's personal armored train awaits him there, and he'll be arriving momentarily to get aboard. We believe his destination is the secret airbase, so you must be a passenger on that train as well, Lieutenant! You're our best chance at finding that base's location, Patterson.

While security is light, the Wehrmacht isn't likely to let you waltz into the terminal, so acquire an officer's uniform for the task. Then, follow Sturmgeist into the station from a safe distance. While you're inside, and before you steal aboard Sturmgeist's train, see if you might disable the main track controls. This should throw the Nazi's supply routes into disarray for a while.

Remember, Lieutenant, there is another important reason you need to be on that train. The Royal Air Force will be launching a bombing run on Emmerich tonight, and sadly, come sunrise much of the city will be nothing but rubble. We'd hate to hear that one of our prize agents was somewhere beneath that debris.

So, get on that train, Patterson! 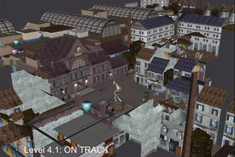 A beta version of the level. You can see the absence of the balcony from which Patterson watched the Sturmgeist. 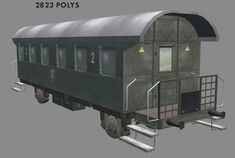 The passenger railcar asset featured in the level.

A railcar that probably should have appeared on the level but was cut out.
Add a photo to this gallery

Retrieved from "https://medalofhonor.fandom.com/wiki/On_Track?oldid=48500"
Community content is available under CC-BY-SA unless otherwise noted.