Nijmegen Bridge is the 10th Mission in Medal of Honor: Frontline and the first mission in Several Bridges Too Far.

Jimmy, we've arranged to smuggle you from Arnhem to Emmerich, assisted by an OSS agent codenamed "Jigs." Unfortunately, the only route to Emmerich is across the river Waal, by way of Nijmegen bridge - smack dab in the middle of Operation Market Garden. Captain Tarver of the 82nd Airborne will escort you to the base of the bridge, but the Allies are not yet ready for a full-scale assault, you'll be on your own the rest of the way. Your silenced pistol should help you sneak onto the bridge, but you should know the Germans have fortified it with machine gun nests and vehicle obstacles. And, as the enemy would rather demolish Nijmegen bridge rather than surrender it to the Allies, the span has been wired with explosives. A special warning: This bridge is a prime location for Nazi sharpshooters. Obviously, acquiring a sniper rifle of your own would certainly level the playing field -- not to mention make a nice trinket for us to take back to the labs for examination!

Once you've crossed the bridge, you'll need a vehicle to get to Arnhem. British troops are in desperate need of support there, so a truck filled with any sort of rations or supplies, preferably medical, would be a very welcomed sight. Also, an anti-aircraft gun on the far side of the bridge has been costing us fighters lately. See if you can reduce it to scrap, Lieutenant.

Jimmy is dropped off next to Nijmegen Bridge, where Captain Tarver is briefing him.

Tarver: "Jimmy, we've got good reason to believe Nijmegen Bridge is rigged to blow, and seeing you've got no choice but to cross her tonight, how 'bout you go ahead and disarm a few of those detonators for your new pal Tarver, huh?"

Jimmy doesn't respond, so Tarver answers for him.

Tarver: "Good, I'll take your silence for a yes. Go get 'em sport."

Patterson walks slowly up the steps, and hears two Germans atop the stairs having a conversation.

German Soldier 1: "That last car we checked was weird. You see that guy?"

German Soldier 2: "Yeah. What was his problem?"

German Soldier 1: "Only the big shots drive through the night."

Jimmy slowly creeps farther and farther up the steps.

German Soldier 2: "The wind off the water is freezing!"

German Soldier 1: "This is nothing. Just wait until winter!"

Patterson, clearly knowing they were talking about him and Tarver, kills them, takes their guns and ammo, and begins walking down Nijmegen Bridge, shooting more German patrols as he goes.

Waffen SS Man 1: "Gets pretty spooky with this fog, doesn't it?"

Waffen SS Man 2: "With our luck, it'll rain all over us tonight."

Jimmy kills them, and goes below the bridge to disarm the bombs, but encounters some more Waffen SS demo teams in the process. Patterson shoots them, and comes across a small German camp on the bridge above.

German Soldier: "Isn't it time for chow? Hey, what time is it?"

Jimmy kills them and some more soldiers, and climbs a ladder to the top of the bridge.

The Waffen SS sniper is shocked, not seeming to see or hear Patterson.

The sniper begins shooting his own men and Jimmy kills him reluctantly, shoots some Germans on the ground, and goes down the stairs.

After a long firefight, he comes across a few tired Germans having a conversation.

James shoots and eliminates the soldiers, and goes down below the bridge one last time to disarm the last few detonators.

Jimmy neutralizes them and disarms the last bombs, and eliminates a last few soldiers before going down a road where a kubelwagen had just parked.

He kills the two guarding it and goes further down the road, where an Antiaircraft gun just shot down an American plane.

Jimmy kills all the soldiers inside and out, neutralizes the AA gun, and makes his escape on the medical supply truck bound for Arnhem.

In this mission, Patterson must pass over Nijmegen Bridge while defusing bombs intended to blow up the bridge, destroy an AA Gun on the other side, and procure a truck full of rations and supplies to the British who are struggling in Arnhem.

Nijmegen Bridge as it appears in-game without the added fog effects. 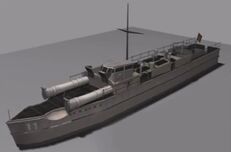 the German patrol boat seen in the level
Add a photo to this gallery
Retrieved from "https://medalofhonor.fandom.com/wiki/Nijmegen_Bridge?oldid=48983"
Community content is available under CC-BY-SA unless otherwise noted.