The Nakajima B5N "Kate" was a Japanese torpedo carrier bomber used by Imperial Japan during World War 2. The B5N featured in Medal of Honor: Rising Sun and Pacific Assault. The B5N was the standard torpedo carrier bomber of the Imperial Japanese Navy throughout of World War 2. The B5N first saw combat in the Sino-Japanese War and later the improved B5N2 in Pearl Harbor along with the A6M Zero. It was the B5N that fired the torpedo which sunk the USS Arizona . The B5N served as the basis for the B6N and the B5N was replaced. The B5N later used for training and anti-submarine warfare. Later in the war they were used in Kamikaze actions.

The B5N "Kate" first encountered in the first two levels along with the A6M "Zero" and D3A "Val", It can be recognized by it's green painting and usually there is a torpedo attached to the bottom of the plane. In the final mission B5N planes can be seen in the hangars.

"Kate" torpedo bomber on the deck of the Toshikaze.

Shima and his men escaping in a B5N.

The B5N "Kate" like in Rising Sun is seen in the Pearl Harbor along with the A6M "Zero" and Aichi D3A once again where it can be seen during the PT boat level dropping torpedoes and bombing ships.

The B5N also appears during the Sitting Ducks where the marines must escape to the submarine where they are attacked by torpedo bombers, the player can either destroy the bombers before they drop their torpedoes or shoot the torpedoes in the water. 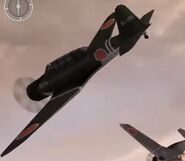 Closeup of a torpedo bomber.

A Kate dropping a torpedo.