Shot in the head by Sad Al Din with a Glock 17.

"Mother" is an American sailor and Navy SEAL in Medal of Honor (2010). He is the team leader of AFO Team Neptune and Task Force Mako until his honorable discharge, after which he was assigned to Task Force Blackbird. He shows great compassion for his fellow squadmates. Mother is a central character in Medal of Honor: Warfighter.

Mother, alongside AFO Operator Preacher, drives into the town of Gardez to find the former Taliban informant Tariq with AFO Neptune, but after Taliban-affiliated Chechen militants ambush Neptune's convoy, Mother and Preacher are forced to fight on foot through the town to link up with fellow operators Voodoo and Rabbit. While making their way through the town they are engaged several times while clearing buildings. After linking up with the other element of their fireteam they continue on foot to Tariq's location. Believing Tariq to be in a room on the second floor of a building, Neptune breaches the room but only finds the body of a man beaten and bound to a chair.

As Mother searches the body, a ringing mobile telephone is heard. Realizing the body was booby trapped, Mother kicks the body and chair onto the balcony before it explodes, showering debris over the four soldiers. The squad moves out and clears a fort held by the Chechens, locating Tariq in a motor garage and extracting him via a commandeered truck. Neptune rendezvous with AFO Wolfpack to hand over Tariq, who has vital information on Taliban positions but must help seize Bagram airfield before continuing to hunt the Taliban.

Later, inserting into the Shah-i-kot Mountains, Neptune's task was to push forward to reach Observation Point Dorothy. With the aid of AC-130 Reaper 31 arrives on scene, the team clears multiple Taliban caves and AAA positions in the mountains. Come afternoon, the team is forced out of OP Dorothy and down the mountain. An MH-47 is called in to provide extraction. The team carries on down the hill, with Mother and Rabbit taking up positions in the Chinook covering Preacher and Voodoo's final movement to the bird.

However, as the pair fall back towards the Chinook, RPG fire and high turbulence force the helicopter to leave the area, with Rabbit and Mother providing suppressive fire for Voodoo and Preacher before they are lost to sight. In a desperate attempt to rescue the two, Mother and Rabbit reinsert into the mountains in order to find them, fighting off dozens of soldiers but are eventually captured and tortured.

Shortly after, Rangers are deployed to rescue AFO Neptune. Rangers who found and joined Preacher and Voodoo eventually rescue Rabbit and Mother from where they are being held and bring them down the mountain to wait for their CASEVAC chopper. However, the helicopter arrives on scene too late and Rabbit succumbs to his wounds.

Mother, Preacher, and Voodoo, are deployed into Karachi, Pakistan to sabotage a black market arms deal. They successfully plant a charge on the truck that they intend to destroy; however, unbeknownst to them, it is filled with PETN. When they detonate the charge, the resulting explosion nearly destroys the shipping docks and sinks a cargo ship, forcing them to flee. They are later debriefed by Dusty, who is now their handler. Mother and Preacher return to the site of the botched sabotage in an attempt to investigate and determine who was purchasing the shipment of PETN. After a long car chase, Preacher secures a cell phone from a terrorist which helps determine that the shipment was due for the Philippines. The team quickly followed the lead to Isabela City, which was being ravaged by a hurricane.

In the midst of the hurricane, a terrorist organization known as Abu Sayyaf Group (ASG) has seized multiple hostages, diverting the SEALs from their mission. Mother and Preacher, sneak into the city unnoticed and set up a sniping observation post on top of a hotel. There, the SEALs liaise with the local government and naval special operations forces of the Filipino military. During observation the SEAL team make visual identification of a High Value Target named Marwan al-Kalifa. Mother asks for clearance to engage the HVT but is denied by General Barrera of the Filipino military. Instead, the General orders his special forces sniper Tiger 12 to take the shot. Tiger 12 hits Kalifa in the shoulder, injuring him, but not fatally so. The SEALs and NAVSOG forces fight through the city to the capitol building but take casualties due to General Barrera's ineptitude. As a result, the NAVSOG team chooses to ignore Barrera and follow Mother who leads the ultimately successful raid which manages to free the hostages. In the process, they also discover links between ASG, the PETN, and a man known as the "Cleric."

However, due to their insubordination, General Barrera is able to have them forced out of the Navy. Mother and Preacher accept their honorable discharges from the Navy, though Mother keeps in contact with Dusty, knowing that one day they would be needed to take down The Cleric.

A few weeks later, Mother goes to Madrid, Spain to visit Preacher, who had been in a coma after surviving a train bombing. When Preacher regains consciousness, Mother reveals that there were multiple bombing attacks throughout Europe. Mother also tells Preacher that he is forming a small covert unit in conjunction with the CIA called Task Force Blackbird and offers him a spot on the team. Preacher is initially hesitant but, encouraged by his wife Lena, agrees to join.

Task Force Blackbird travels to Darra Adamkhel, Pakista and coordinate with Ajab, a local CIA operative, to investigate Pakistani ties to ASG and the PETN. They apprehend Faraz, a local black marketeer, who gives them information on a banker named Hassan who is involved in the smuggling. Dusty then assigns TF Blackbird to abduct and interrogate Hassan in Dubai. Mother and Preacher take him captive, but are forced into a high speed chase by his security, led by Sad Al Din.

Though they are successful in uploading the contents of Hassan's laptop to Dusty, they are run off the road and taken captive. However, Dusty is able to determine from the contents of the hard drive that the PETN came from Sarajevo, where Stovan Bosic, a weapons dealer Dusty used to work with, was selling it. TF Mako links up with the Polish GROM and takes down the arms dealer.

After the car wreck, Mother and Preacher are taken to an enemy ship and interrogated. When Sa'ad al Din asks who is calling their phone, Mother defiantly replies "Your mother". As a result, Sa'ad al Din shoots Mother in the back of the head, killing him.

Mother's funeral service is shown at the end of the game. Mother's wife is joined by Preacher with his family, Dusty, Voodoo, Stump, Tick, and Dingo.

Mother has many leadership qualities: bravery, honor, courage, and responsibility, and uses them to lead his men into battle. In Medal of Honor, his personality is brash, harsh, and considerably cold. After saving Rabbit from a Taliban fighter, he harshly states "I just saved your ass", suggesting he doesn't tolerate mistakes. He contains his grief over Rabbit's death, knowing that the war is far from over. Similar to Voodoo and Corporal Hernandez, he swears constantly on the battlefield.

His callsign, Mother, came from Voodoo and Preacher who teased him for all his nagging while leading the unit. He cares deeply for his teammates which occasionally brings him into conflict with his superiors. In Medal of Honor, he circumvents orders trying to save Voodoo and Preacher, which unfortunately led to his and Rabbit's capture (and Rabbit's eventual death). Later, in the Philippines, Mother disobeyed General Barrera to save the hostages being held by Khalifa.

Mother also has a sense of humor, once deadpanning to Preacher "We need to stop meeting like this" when both were captured by terrorists. He also jokingly suggested that he would shoot Preacher if he had to listen to the latter's hip-hop music.

In his personal life, Mother was married and had an unnamed son who was mentioned. He was also close friends with Preacher and spent time with him and his wife Lena. 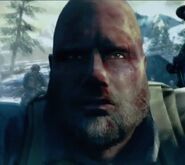 Mother, encouraging a dying Rabbit to hang on 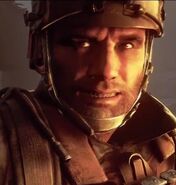 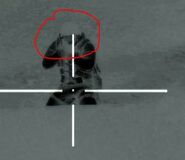 Mother seen through Deuce's scope in Friends from Afar.