The Mitsubishi A6M "Zero" or "Zeke" is a Japanese fighter aircraft used in World War 2 by Imperial Japan, and featured in Medal of Honor: Rising Sun and Pacific Assault. At the start of the World War 2 the A6M was one of the best fighter planes and gained a legendary reputation. By 1944 the A6M became outdated and outclassed by the more advanced allied planes but the A6M remained in service. At the end of the war Japanese pilots adapted the A6M for Kamikaze tactics. The A6M was Japan's most produced fighter aircraft during the war.

The A6M Zero is the main enemy in the first two missions along with the Nakajima B5N. and Aichi D3A, Most of the Zeroes are painted white but there are some which are painted green. Zero planes can be seen during the mission: Fall of the Philippines and the last mission: Supercarrier Sabotage. In the end of the last mission Griffin and Bromley used a Val dive bomber to escape from the supercarrier and several Zeroes chased them but Griffin successfully took them down.

Zero in the hangar on the toshikaze.

A6M Zeroes in the starting cutscene of "Fall of the Philippines."

Zero going down in Pearl Harbor.

Zeros chasing after Joseph and bromley.

Like in Rising Sun the A6M Zero first can be encountered during the mission Pearl Harbor and serves as the main enemy type for the level along with the B5N. At the Sitting Ducks a Zero planes tried to destroy the USS Nautilus. Thomas Conlin shot a Zero down using Frank Minoso's BAR. During the Flyboys level, once again, the A6M Zero is the main enemy.

Some zeroes can also be seen in multiplayer dogfighting with american P-400s.

A6M Zero in the starting cutscene of "Pearl Harbor". 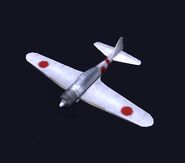