The Mills Bomb appears in the Spearhead's singleplayer and multiplayer as the standard grenade for the British Soldiers. The Mills grenade is very similar to the Mark II Frag grenade but it has a slightly larger blast radius. It can be used in Breakthrough's singleplayer with hacking.

Taking off the pin.

The Mills Bomb or Brit Grenade as it is named in-game returns in European Assault. It is usable during the St.Nazaire campaign as the grenade for the commandos. It functions the same as the other grenades. 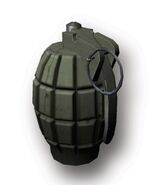