Meyer was tasked with manning the right door minigun for Prowler 03's Chinook prior to inserting the QRF to rescue Mother and Rabbit in Rescue the Rescuers. However, before reaching the LZ, the aircraft is engaged by Al-Qaeda, hit by an RPG and crashing into the mountain. Meyer is hit in the head with small arms fire, killing him, just before the helicopter crashes. His death was confirmed by Ybarra when he checked his body after the crash. 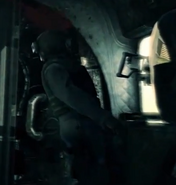 Meyer shortly after getting hit.
Add a photo to this gallery

Retrieved from "https://medalofhonor.fandom.com/wiki/Meyer?oldid=52310"
Community content is available under CC-BY-SA unless otherwise noted.