She is based on Hélène Deschamps Adams, a member of the Office of Strategic Services. Producer Scott Langteau offers that "Manon used petrol bombs and her femininity to gain access to restricted areas. We used the freedom of telling her backstory - she was in the French Resistance, then joined the OSS - to give the game its own flair and widely varied missions that took us all over Europe: Greece, Italy, etc."[1]

Red haired Manon was born on May 1, 1912,in the small village of Dubuisson, France, but spent most of her life in Paris, where she lived with her older brother Jacques. Her father was a French soldier in World War I and was gassed brutally in 1917 by the Germans in which he never fully recovered from his injuries.

After Germany invaded, Manon and Jacques joined the Maquis to resist the invaders. After a brief battle with

the Milice on her birthday, May 1, 1942, Jacques was killed when the truck he was driving was blown up with supplies and munitions. The mortified Manon escaped Paris through catacombs. She fled to the village of Saint-Marie des Champs, in which Manon quickly liberated the old town of the Germans, destroyed tanks, and helped disguise a printing press for a group of fellow resistance members.

Recruitment to the Office of Strategic Services[]

Having escaped Saint-Marie des Champs, Manon made contact with the American Office of Strategic Services, but she did not expect them to be looking for her as well. She learned that her brother also had contact with the OSS, and that he even kept her identity secure to save her from capture by the Germans, and other acts of heroism performed by Jacques. Colonel Hargrove, hearing of her extreme bravery, takes her in as an agent and sends her off to North Africa on her first mission.

Her first assignment is to disrupt German defenses in North Africa in November 1942, in preparation for the impending Operation Torch. She takes the place of a Vichy French photographer for the German Propaganda Ministry. She infiltrates a German fuel depot, radios the American fleet, and destroys the depot. Manon escapes by infiltrating an airfield, disables the anti-aircraft guns guarding it, signaling her escape, a modified Northrop Alpha the OSS sent to get her. The pilot of her extraction is none other than Jimmy Patterson, who Manon will get see more often before the war is over, and they would eventually date.

After her success in North Africa, Manon is once again sent undercover to Crete in a stolen Italian fishing trawler. The Germans have installed a heavy artillery battery to sink Allied shipping in the Mediterranean, while they are also defacing artifacts of the Palace of Knossos. After treading through a fire fight between German Soldiers and Greek Privateers, Manon reaches the site. She eliminates the pseudo archaeologists and liberates the artifacts. After destroying the bunker supplies she makes her way to the guns themselves, destroying the bunker communications and the Antiaircraft guns.

The OSS is nervous about the power the SS has achieved under Himmler. They are even more worried about what secrets lie in Heinrich Himmler's headquarters, a castle called Wewelsburg. In September 1943 Manon is sent in to investigate. She sneaks through the outer defense and gets on board a cable car to the castle itself. Inside, Manon steals the Knife of Abraham, the weapon used to during the Binding of Isaac, and blows open Himmler's safe, stealing whatever information she can, while battling SS troops and Himmler's elite twelve SS knights. Manon also finds Valhalla, a burial chamber for Hitler, Himmler and other high ranking Nazi leaders after their death, but was also used to communicate with deceased German kings. She flees down the castle, destroys a bridge and alarm controls to slow the Germans, and hides out in a safe house with a resistance contact until she can reach Allied headquarters.

In order to break the stalemate in Italy, the Allies decide to bomb the historic Monte Cassino Abbey against their will. Unfortunately, a transmission from a monk notifies the OSS of American prisoners of the 8th Army Air Force being held in the abbey. In June 1944, Manon is sent to rescue them. After getting through German defenses, Manon finally reaches the abbey itself. Freeing the Captain, he helps her release the other prisoners. After the prisoners have been evacuated, the men and their Captain leave safely. Now alone, she captures and destroys vital intelligence, and is able to destroy several German Halftracks.

During the Allied invasion, Manon was a vital source, helping OSS agent Mike Powell in his mission to gain intelligence on the King Tiger tank as well as staying in touch with the French Resistance, sheltering care of an American pilot by the name of Joe Baylor who was shot down over the outskirts of her hometown, Dubuisson.

In June 1944, Manon is awarded with news that the ATC pilot who rescued her from North Africa, James Patterson, is joining the OSS and she is to be his boss. However, the Germans begin to use V-1 Rockets to terrorize London, one happening to hit near Hargrove's OSS headquarters in the city. Determined to stop this, Colonel Hargrove sends Manon into Northern France in July to stop the V-1s from reaching London and any other cities being bombed. Manon receives the factory plans and explosives. After navigating through the German Lines, Manon takes the tram into the factory. There, she destroys V-1 machinery and destroys a large V-1 stockpile. Running for her life she barely escapes the explosion. Manon finds her contact, and Allied agent codenamed "Sonntag" disguised as a German and gets on his motorcycle, mans the machine gun, shooting down any Germans in the way; en route to escaping she also destroys two V-1 launch sites.

In August 1944, with the Allies on the offensive, the citizens of Paris rise up against their German occupiers. The OSS is aware of this and is also aware of Hitler's orders to burn the city to the ground, but Dietrich von Choltitz, the German General of Paris, has different plans. Although von Choltitz has refused to burn the city of lights, the deportation of explosives is still being done. Manon is sent in to prevent this from happening. Destroying halftracks, tanks, and German Barricades, she liberates the Paris Prefecture and heads towards the subway where two trains bringing explosives are expected. After an intense fire fight Manon diverts both trains as they crash into each other causing a huge explosion. Her fight to liberate Paris avenges Jacques' death.

Manon was sent undercover for two months as a domestic servant for Colonel Hermann Müller, the commander of Fort Schmerzen, a large fortification along the Siegfried Line. During the time, she learned a number of things about Müller and his strange plans to renovate the fort. Schmerzen was being reconstructed for a "secret project," and unfortunately she couldn't find out what this project was in time. In November 1944, Jimmy Patterson was sent to Fort Schmerzen to obtain information on their project and destroy the fort itself. Schmerzen was preparing to produce Mustard gas and drop it on top of American troops of the 506th Parachute Infantry Regiment trying to maneuver around the Siegfried Line and into Germany, something that fortunately was stopped before anything could happen.

After September 1944, Manon Batiste continued to work for both French Intelligence and the OSS. In December 1944,

she was involved in an OSS operation to investigate the Nazi Virus House project. For the first time in the war she was captured by Freder Engel and held in a farmhouse in Belgium. Fortunately she was rescued by OSS agent William Holt.

Batiste dated an employee at the Office of Scientific Research and Development for a while in 1944-45 until they decided to end the relationship due to an unknown reason. Manon felt uncomfortable referring to him as a "boyfriend". He told Manon about the German's plans to produce a nuclear bomb, and schooled her on the science of Heavy Water and its uses.

Manon and Jimmy always had a good friendship, and when Colonel Hargrove announced that Manon would be his boss in the OSS, he even said, "My gut tells me the two of you [Manon and Jimmy] will make a good team." Towards the end of World War II they began to date, and in 1945, Patterson proposed to her. It is unknown if she accepted or declined, but if she accepted, her grandson would be Jim Patterson, a Sergeant in the 75th Ranger Regiment fighting in Iraq and Afghanistan.

Mike Powell and Manon Batiste met through Colonel Hargrove and he spoke highly of Mike Powell to Manon and because of this he was assigned on several critical and important infiltration and spy missions with Manon Batiste in France and she regarded him as a close friend and trustful ally.

GameSpot praises the game makers for taking "a character from the original game named Manon Batiste and placing her in the lead role so that her full story can be told." "This setting is a welcome change, as Underground provides a meaningful historical context that's rare in most video games today." William Abner similarly describes the game as "a refreshing change of pace because you played Manon Batiste, a woman enlisted in the French Resistance."[2] RealPoor ranks her among The 12 Best Female Characters in Video Games, declaring that we "know Manon as a French Resistance Agent who appeared as an advisor in the first MOH game. In the sequel for The PlayStation called Medal of Honor: Underground, she is the main character who takes on covert missions in occupied Europe and Africa."[3]

Manon Batiste in the cover art of Medal of Honor: Underground.

Load screen to the next level. 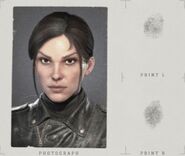 Manon Batiste in Medal of Honor: Above and Beyond.