The Heckler & Koch MP7A1 is a compact personal defense weapon featured in Medal of Honor (2010) and Medal of Honor: Warfighter. The MP7A1 is redesigned version of the MP7 and it is used by many countries across the world. It fires special 4.6x30mm armor-piercing rounds with low recoil and high rate of fire, with moderate stopping power.

The MP7 appears in the missions "Running with Wolves..." and "Friends from Afar". In "Running with Wolves..." it is equipped with a Holographic Sight and a suppressor, while in Friends from Afar it loses the suppressor. The MP7 has two fire modes, semi-automatic and automatic, both of which can be useful to the player, semi-auto for medium ranges and automatic for close range. The MP7 can kill hostiles quickly, and has a good accuracy even when firing on full-auto. It is the preferred close combat weapon of the four AFO Wolfpack members.

MP7A1 equipped with a silencer.

Looking through the holographic sight.
Add a photo to this gallery

The MP7 is available to both multiplayer factions, and is a primary weapon for the Special Ops class if the player has the limited edition. It has medium accuracy, a high rate of fire, large magazine capacity, and medium damage. It is available instantly to users who pre-ordered the Tier 1/Limited Edition of the game. Despite being a Personal defense weapon, the MP7 performs admirably as a counter sniper weapon, as it can be fired full auto with only a small amount of recoil. Attaching the combat scope increases recoil by a considerable degree, so when using this weapon at middle to long range, it is recommended that the player equips the holographic sight. Open tip ammunition can be used to boost damage, but the high rate of fire means reloads are very frequent, and the user may have to give up the damage buff for extra magazines. However, the MP7 carries 40 bullets per magazine, countering its high fire rate.

The MP7 being reloaded in the Limited Edition trailer for the game.
Add a photo to this gallery

"4.6 mm submachine pistol capable of defeating body armor it is a favorite of SOG and other elite units. Itʹs light weight and rate of fire make it a formidable weapon."
— Battlelog Description (Sic)

In Multiplayer, the MP7 is available for the Spec Ops class.

Having the highest rate of fire of all the primary weapons, the MP7 has a very quick time-to-kill in close quarters combat, and its status as a Personal Defence Weapon grants the user fast movement. The quick reload time helps when facing multiple targets, since the magazines empty quickly.

The MP7's accuracy is good, at least at a short-medium distance, but its large damage drop-off makes the weapon unsuitable for long range engagements. This characteristic does compliment the use of a suppressor, as the reduced range of the silencer does not drastically effect the MP7, due to its small difference between the maximum and minimum damage values. Despite its low damage per shot, its high rate of fire and controllable recoil makes up for this when fired fully-automatically. Ammunition conservation is also vital when using the weapon, as the player can only hold 3 magazines in reserve. As such, frequent resupply from either a Heavy Gunner or Fireteam Buddy is essential when using the MP7.

MP7A1 equipped with an aimpont red dot sight.
Add a photo to this gallery 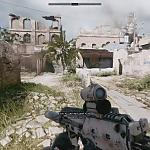 MP7A1 in MOH:WF multiplayer, equipped with an Aimpoint Micro and a SureFire Suppressor

Iron Sights
Add a photo to this gallery

Retrieved from "https://medalofhonor.fandom.com/wiki/MP7A1?oldid=48313"
Community content is available under CC-BY-SA unless otherwise noted.