In the first mission Occupied!, Vichy French Milice units use rifles which cleary have a different sound effect than the Karabiner 98k. Although the rifles use the same skin as the Karabiner 98k, it is quite possible that they are supposed to be French MAS-36 rifles, which is what Vichy French forces would have used during the occupation of France. The player cannot use it in game. 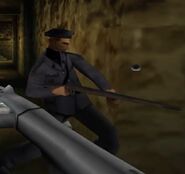 Vichy French Soldier armed with a MAS-36.
Add a photo to this gallery

MAS-36 rifles are used by the Vichy French infantry in the Tiger at the Gates mission and they make the same sound as the M1 Garand. Like Underground, it cannot be obtainable for use.

french soldiers with MAS-36 rifles
Add a photo to this gallery
Retrieved from "https://medalofhonor.fandom.com/wiki/MAS-36?oldid=50259"
Community content is available under CC-BY-SA unless otherwise noted.