The M9A1 Bazooka is a rocket launcher named after an instrument invented by a musician. It fires a 2.36 inch explosive shell. In World War 2 it was first used in North Africa and later upgraded versions of the Bazooka saw limited use in Korea and Vietnam. During the North African campaign the Germans reverse-engineered the captured Bazookas and the Panzerschreck was born. In the Medal of Honor series almost every game feature one of the versions of the Bazooka except Pacific Assault and Airborne where it's replaced by the M18 Recoiless Rifle and the modern entries of the series.

In Medal of Honor, the Bazooka is the primary rocket launcher, as the Panzerschreck is only in use of the

Germans. The M9A1 is a very powerful weapon, capable of killing enemies within a radius of approximately 10-20 feet. Bazooka appears in the sixth and seventh mission in singleplayer campaign. It can be also used as a melee weapon after spending the ammo, hitting the enemy with 2-3 strikes. The weapon can be used longer if the cheat code for unlimited ammunition is activated, which is very good in firing against large groups of enemies. In the beta version the M1 variant was present in the game, however it was changed during development.

In Underground the Bazooka is only available in multiplayer as it was replaced by the Panzerfaust in the single player.

In Allied Assault and its expansion packs, the M9A1 Bazooka is replaced by the M1 Bazooka (referred to simply as Bazooka). It is the primary rocket launcher for the Allied, although in Breakthrough the British use PIAT instead.

The Bazooka functions the same as the Panzerschreck. It is very powerful, but reload is extremely slow. Trajectory of rocket is not perfectly predictable at longer range. When equipped, it slows down the movement of the user. The rocket explosion will harm anyone, be it friend or foe, within its blast radius. Bazooka cannot be used as a melee weapon.

In Allied Assault it appears only in mission Day of the Tiger, where it is picked up in the first part of "Sniper's Last Stand" and is used to destroy a tank in the second part of the level. 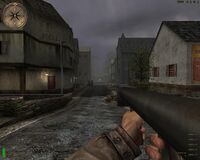 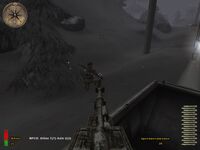 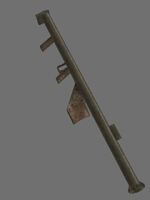 The M9A1 Bazooka in Frontline is a very rare weapon and is only used during the final four levels. It is very powerful, and can kill an enemy in one hit in the single-player campaign. It is also very useful against large groups of enemies and can be used longer if the cheat code for unlimited ammunition is activated.

The M9A1 Bazooka in Rising Sun is different from the one in Frontline. It is covered in a tiger camo paint scheme and is only usable in In Search of Yamashita's Gold, located in one of the boxes on the left, right after entering the temple. It is a very good weapon at medium range, as it can kill a group of enemy with one shot. The M9A1 Bazooka also appears in multiplayer in a couple of loadouts. Like the previous games, the weapon can be used longer if the cheat for unlimited ammunition is turned on, being useful in taking out the Japanese soldiers.

The M1 Bazooka is given to the player if he/she chooses the M1911. The Bazooka has high damage, capable to kill an enemy with one shot and the explosion radius is also high. 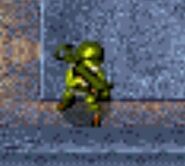 Bazooka in Medal of Honor: Infiltrator. 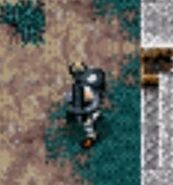 The Bazooka in European Assault comes in two variants: the M1 and the M9A1. Both weapons function the same, the only difference is that the M9A1 has a scope which makes aiming easier. In campaign the M1 can be found in the Russian campaign while the M9A1 is in the Belgium campaign. Both Bazookas can be found in some multiplayer levels as well. As in the previous games, both versions of Bazooka can be used longer if the cheat code for unlimited ammunition is turned on, being very useful in taking out large groups of German soldiers and tanks.

Single
The Bazooka makes its first appearance in Operation Neptune, and later, in Operation Market Garden and Operation Varsity. It is very powerful, as it can blow up enemies with one shot, but is most commonly used to destroy the Tiger tanks, which can take 3 hits. It is absent in multiplayer. The version of it is M9A1, visually identical to the one from European Assault, only being somewhat dirty and has some visual marks on it.

Just like in European Assault both the M1 and M9A1 Bazookas appear in both games but the M9A1 in both games is incorrectly labeled as "Panzerschreck". In Heroes the M1 is a rare weapon and can be found in the last level of the game. The M9A1 appears as well and can be seen carried by SS Soldiers. They are a serious threat and advised to eliminate them as soon as possible. Both Bazookas use the same models from European Assault and the sounds as well. Performance wise both Bazookas are great to eliminate squads of enemies with a single shot.