The M1941 Johnson is an American light machine gun which saw service with the United States Paramarines and Mountain Infantry Divisions due to its low weight in comparison to other weapons of its class. It saw heavy service in the ETO with Allied special operations units, but was ultimately outproduced by the M1918 Browning Automatic Rifles and M1919 Browning light machine guns. It is the counterpart to the M1941 Johnson Rifle which was meant to be the successor to the M1 Garand service rifle.

United States Marine Corps
Thomas Conlin
The M1941 Johnson has a low rate of fire and open ironsights, also possessing a large amount of recoil and a low magazine capacity, at twenty rounds. The weapon is rather large, taking up the entire lower half of the player's screen. It is only seen during the defense of Edson's Ridge during the Battle of Guadalcanal, being fired by a Marine defending his position just behind the line of M1919A4 Browning light machine guns. It is usable only when the Marine that has it at Edson's Ridge is killed so the player can swap it for one of player's current guns. The only other way to get it is from Medal of Honor: Pacific Assault Director's Cut Edition or via developer console commands. 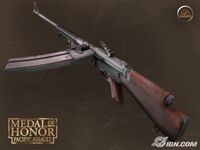 M1941 Johnson in a promotional image.

The M1941 viewed from the left.
Community content is available under CC-BY-SA unless otherwise noted.
Advertisement