The Springfield is a 5-round, bolt-action service rifle, used officially from 1905–1937, although it saw service throughout and beyond World War II. It is reloaded via inserting bullets by one each into the magazine in most of the games due to the position of the scope, alternately is loaded with a 5-round stripper clip. Firing a powerful .30-06 round, it can deliver devastating and accurate fire even over range, though it has a very low rate of fire and magazine capacity due to its nature as a bolt-action rifle. In every Medal of Honor game the Springfield is seen in, it always has a scope attached with the exception of Pacific Assault, where an unscoped version is seen and available for use.

James Patterson
The Springfield 1903 is the only sniper rifle in the first game. It is highly powerful like the M1 Garand because they share the same cartridge (.30-06), which was used as a primary rifle cartridge by the United States Military from 1906 through the Korean War, and remained in service until the early 1980s. The 1903 is found in two levels, Find the Gift Package and The Rooftops of Dachsmag as supply dropped behind enemy lines, and is usable to the end of mission Destroy the Mighty Railgun Greta and Scuttle Das Boot U-4901, respectively. Due to the poor graphics by today's standards, using the scope at long range can be difficult, restricting usage to medium range combat only. As usual in video games, sniper rifles are not good for close quarters unless shooting point-blank range and the player is only facing 1 enemy. When the whole ammo is empty, it can be used as a melee weapon.

It's picture is found in Underground's multiplayer weapon selecting screen, but it's replaced by Gewehr 43.

M1903 Springfield in Medal of Honor. 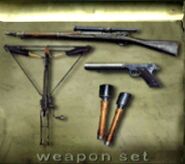 James Patterson
The Springfield is updated and considerable margin from Allied Assault, though is still highly powerful, and it uses the same firing sound. It is one of two sniper rifles in the game, the other being the scoped Gewehr 43. Compared to the Gewehr 43, it has a more user-friendly scope, but has a considerable slower rate of fire, as it is a bolt-action small arm.

Although Springfield has better sniping capabilities, Gewehr is still better because of its semi-auto fire and 10-round magazine.

M1903 Springfield in the Remastered edition.

Scope reticle in the remastered version.

In the video of the early version of the game, in the menu of available weapons there is an icon of a sniper rifle (most likely M1903/A5 Springfield, as all the weapons in the game are American). However, it cannot be used in a final release as it was cut from the game.

An excerpt from the video about the prototype of the game. On the third bottom of the icon depicts the M1903/A5 Springfield.

United States Marine Corps
Joseph Griffin
The M1903/A5 Springfield is seen rarely in Rising Sun, but is one of the player's starting weapons in Midnight Raid On Guadalcanal, In Search Of Yamashita's Gold, and A Bridge on the River Kwai. The Springfield has a low rate of fire, but has good accuracy as a balance. In Midnight Raid On Guadalcanal Adams and Davis have an unscoped variant of the Springfield, but is not usable in game.

In single-player, unless aiming for the head, it's underpowered, taking three hits to shoulders or chest to kill.

In multiplayer, the Springfield can be selected as one of the four weapons used for any split-screen game. It is capable of one-shot kills, but many players prefer to use the M1 Garand due to its similar damage and higher rate of fire.

In the early screenshots of the game the Springfield re-uses the model from Frontline, however it was changed in the final game.

The Springfield in an early build of the game.

The Springfield appears as both an unscoped and scoped rifle in this game. The Springfield holds less power in PA than all the other version's Springfields, as is no longer capable of achieving 1-hit kills below the neck, though it will be a 1-hit kill should the player make a headshot. This time, the scoped version is rare to find (available only in training camp and Tarawa), while the unscoped Springfield is more common. This is the main weapon of William Gaines.

M1903 Springfield as it appears in Medal of Honor: Pacific Assault.

M1903 Springfield with a scope.

82nd Airborne Division
17th Airborne Division
Harding
Boyd Travers
The Springfield is an American bolt-action rifle and is a choice for the player's loadout in the game. It is extremely similar to the K98k in terms of power and upgrades, having a slight increase in damage, but has much better accuracy and range due to its sniper scope.

Springfield in a promotional image.

The Springfield in Medal of Honor: Heroes 2