The K98k is the standard German infantry weapon in the original Medal of Honor and the prequel, Underground. It is the German Army's primary offensive weapon for the early-mid part of the campaign and it's only seen in the hands of enemies. Levels not featuring Mauser are quite rare in original game: Sneak Into the Rail Station, Escape the Wolfram, Dive! and whole mission Escape from the V2 Rocket Plant. In total, Mauser is absent in 6 Medal of Honor levels. In Underground, it's not found in Burning Sands, whole mission Undercover in Crete, Prisoners of War and Mayhem in the Monastery.

Afrika korps soldier with a Kar-98k.

In the main game, the standard form is usable only in the level Omaha Beach, if the player doesn't pick up the Springfield in the bomb crater, though it is seen in all missions. In Spearhead, it is one of the player's starting weapons in the levels Under Attack and Quiet Little Town of the Bastogne campaign, where it is also seen in the hands of other 101st Airborne soldiers, along with other german weapons. In Breakthrough it is available in the Bizerte Harbor Level, but only if the player doesn't pick up the Carcano.

A development oversight resulted in the K98k's appearance to have a rounded front sight (similar to the Russian Mosin-Nagant rifle) as opposed to a U-shaped hood and the reloading animation for the non-scoped version shows Powell inserting the entire 5-round stripper clip into the rifle all the time, regardless of the remaining capacity of the chamber.

The sniper variant is available to the player once in the main game, in the level Diverting the Enemy. It can also be obtained in Breakthrough in the level Kasserine Pass 2 and in Spearhead in the level Quiet little Town. The K98 sniper is highly powerful, more so than its American counterpart, being a 1-hit kill to the torso and head and sound of its gunshot is not the same as its non-scoped brethren. Unlike the standard variant, this sniper rifle has its bullets reloaded one at a time.

It is used in multiplayer for those who choose the rifleman class on the Axis team. It is highly powerful, being a 2-hit kill to the chest and 1-hit kill to the head. It is reloaded via a stripper clip, and the reloading time is around 2.5 seconds. Also is used sniper version, but since Spearhead it is replaced by a more convenient rifle Gewehr 43 with a sniper scope. The sniper version of K98 remained with the Italians in Breakthrough.

The Kar-98k has a unique version in the multiplayer of Medal of Honor: Allied Assault: Breakthrough. It has a rifle grenade attachment which can be applied by using the secondary-fire button. It fires grenades with a short range. The rifle itself functions the same as the original Kar-98k but it has a unique grey finish with the front of the gun being wrapped up.

Kar-98k with a scope in Medal of Honor: Allied Assault

Kar-98k with a loaded grenade launcher on the ground.

The K98k is for enemy use only, just like in the original two Medal of Honors. It is not as powerful as it was in Allied Assault, as it takes 3 hits to kill the player in the difficult settings.

Dropped Kar98k on the ground.

Kar98 is a weapon only available to the enemy. It appears in the standard version and with a sniper scope. One shot takes 9 HP from the player. It has a high range. It is the most common enemy weapon in the game, slightly inferior to the MP40. 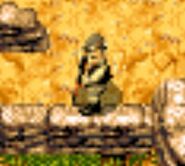 In European Assault, the K98k can be found throughout the campaign, expect Battle of the Bulge. It has gained an overhaul for the better in European Assault, it is highly powerful, being able to take out an enemy in 1 shot to the head or chest and also boasts low recoil, but it's drawbacks are its low ammo capacity of 5 rounds and it's bolt-action nature. These choices make it a good weapon, but it is advised to use a pistol or SMG for close quarters as a bolt-action performs badly outside of medium-long range combat. The K98k is mostly used by the Wehrmacht in the first half of the game but it's saw use by the No. 2 Commando and 7th Armoured Division soldiers as well.

In Vanguard, it is exactly the same as it was in European Assault, sharing the same accuracy, same power, and the same skin. It can kill with a shot to any part of the body, and is very good for reload canceling as it's reload is glitched and is loaded as soon as the reload animation starts, somewhat making up for it's slow rate of fire due to its bolt-action nature. It is very common throughout the early levels, but later in the game during Market Garden and Operation Varsity the MP40 will gain dominance as the German infantry main weapon.

Wehrmacht
Fallschirmjäger
Panzergrenadier
James Patterson
John Baker
William Holt
John Berg
The K98k returns in both games as one of the main weapons of the German forces. In Heroes it can be found throughout the game and sharing everything from European Assault. It can be choosen as a starting weapon in Skirmish/Multiplayer.

In Heroes 2 the K98k is a rare weapon to find, only appearing in the Sewers level where it's overpowered by the M1 Garand's higher ammo capacity and rate of fire. It can be seen used by Wehrmacht soldiers along with the unscoped Gewehr as one of their main weapons. In both games the K98k is a very powerful weapon capable of one-shot kills in single-player. Like in Heroes it can be choosen as a starting weapon in Multiplayer.

In single player, the Kar98k is a favored pick for the Wehrmacht forces. It is only seen in the hands of Italian Blackshirts, but later on in the game it is replaced by the Gewehr 43 as the main Axis Infantry rifle. It has low rate of fire and reload, but high power, high accuracy, and the ability to launch grenades.

The K98 rifle is one of 2 rifles the player can select for the Axis side. It is very powerful, almost always a one-shot kill, but is bolt-action, with a slower bolt cycling time than the past 2 Medal of Honors, and initially reloads one bullet at a time. The following are possible upgrades for the rifle:

These upgrades make it a good choice for mid to long-range, but an automatic or close range weapon is needed should an enemy attack or forced into a close quarters area.

Kar-98k in a promotional image.

The Kar 98's stats in the weapons select menu