Kabul City Ruins is a multiplayer map in Medal of Honor (2010). The map is used for Objective Raid, Team Assault and Sector Control.

This map takes place in the middle of Kabul square. The streets are lined with debry and are often clear due to the ease to be killed while walking

The more often taken routes are the corridors near the edge of the map. They are where enemy players wil be found most often.

There are several buildings which players can ascend into, with one even having a small stairwell that goes under the building. All of these building have good vantage points over the corridors and can provide support against Offensive Support Actions. 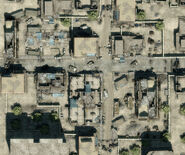