Corporal Jake Murphy is an American soldier during World War II and the main character of Medal of Honor: Infiltrator.

Any American weapon in the game, MG-42, Tiger I.

Tiger at the Gates[edit | edit source]

American forces under General Patton are charged with the invasion of French Morocco. Corporal Murphy and his division are tasked with securing the initial beachhead. Murphy's landing craft comes under heavy artillery and machine gun fire from the beach. About a third of the squad is blown up after not exiting the landing craft in time, and the rest of the men abandon Murphy. Corporal Murphy has to take the beachhead...alone! After fighting through waves of French and German troops, Corporal Murphy successfully secures the beachhead and a lighthouse that will guide the USS Dallas to the river.

After that, Corporal Murphy protects the USS Dallas on its way to Port Lyautey by gunning down any Germans in its path. Once at Port Lyautey, Murphy captures an Axis airfield vital to Patton's plans.

Following his success, Murphy is transferred from the 3rd Infantry to the OSS: the secret service. A leader of a local Breton resistance group finds a German major who wants to defect, Sebastian Diesler. On November 25, 1942, Murphy is sent to Brittany, France, to help Diesler's defection in any way possible. He sneaks past guards and meets up with Diesler in his HQ. Murphy then captures an airfield, which is vital to Diesler's defection. After battling swarms of German reeinforcements, the two make their escape.

Following a tip off from Diesler, Murphy is sent back to Africa to study a suspicious build up of enemy troops near a ruin in the Tunesian desert. When Murphy finds out they're building a tank factory, he valiantly decides to sabotage their efforts.

Murphy is sent on another OSS mission in Brittany, where he has to destroy a strategically important bridge. The bombers Murphy is escorting are ambushed, and Murphy becomes tailgunner. Although he destroys many of the enemy fighters, Murphy is shot down, and has to survive the onslaught of waiting Germans. He is ultimately successful in taking out the bridge with a demolition pack.

Trail of the Beast[edit | edit source]

Murphy returns to England to find out that Diesler has fled the country with a number of top secret documents. On January 15, 1943, Murphy is sent to a U-Boat base in Bergen, Norway, where he fights his way through most of the enemy troops at the U-Boat base before confronting Diesler. Once Diesler and his bodyguards are killed, the game is over.

Jake Murphy on the cover of the game 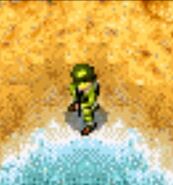 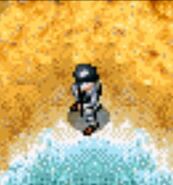 Murphy in Max-gi
Add a photo to this gallery
Retrieved from "https://medalofhonor.fandom.com/wiki/Jake_Murphy?oldid=52280"
Community content is available under CC-BY-SA unless otherwise noted.