"Oh, fuck this, I've seen this movie. Private, switch with me."
— Hernandez

Corporal Hernandez is a non-playable character in Medal of Honor (2010). He is a member of the 1st Battalion, 75th Ranger Regiment under Sgt. Jim Patterson.

During Belly of the Beast, Hernandez fought alongside Sergeant Patterson and Specialist Dante Adams. In combat, he is shown as fairly headstrong and aggressive. In Rescue the Rescuers, he was thrown around violently after a RPG hit his squad's Chinook, but remained uninjured until after Patterson's men advanced up to a small spider hole, in which he ignored Sergeant Patterson's advice to stand back. As a result, he was shot multiple times in the shoulder. He was left behind with Technical Sergeant Ybarra to find medical help. Hernandez is shown at the end watching over the site with the remainder of the Rangers and SEALs.

Hernandez awating deployment in Belly of the Beast 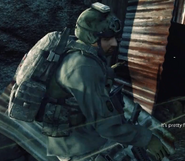 Hernandez getting shot in Rescue the Rescuers.
Community content is available under CC-BY-SA unless otherwise noted.
Advertisement