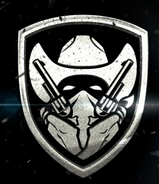 Gunfighter 06 is the callsign of an AH-64 Apache in Medal of Honor (2010). The gunner is Cpt. Brad Hawkins. They also seem to offer intelligence to Bulldog 6 to relay back to Python 1 during the game's multiplayer aspect.

The singleplayer campaign features Brad Hawkins as a playable character. They first repel a large number of Taliban from the ruined building where the Rangers, including the playable character Dante Adams, are pinned down and out of ammunition. The pilot is voiced by Ray Porter.

They are mentioned and heard several times, offering some intelligence about enemy fortifications. However, they do not make a physical appearance.

A close-up of the two gunfighters.

The weapon camo in Medal of Honor: Warfighter dedicated to the two Gunfighter units.
Add a photo to this gallery

Retrieved from "https://medalofhonor.fandom.com/wiki/Gunfighter_06?oldid=32212"
Community content is available under CC-BY-SA unless otherwise noted.