Gas Mask
Private G. Novotny was a U.S. Marine who is a minor character in Medal of Honor: Rising Sun. He is part member of the US Navy and the US Marine Corps.

He is first seen in Day of Infamy, where he serves with Cpl. Joe Griffin and Gunnery Sergeant Jack 'Gunny' Lauton on the USS California during the Japanese attack on Pearl Harbor on December 7, 1941. He is seen as an engineer on deck fighting off enemy planes. He can be distinguished by his gas mask. It is unknown how he survived the attack.

He is later seen on Guadalcanal, as part of 2nd Squad during a midnight raid on August 7, 1942. His squad, along with Gunny Lauton's squad, rendezvous at the landing zone. Just as Gunny notes it is too quiet, and something isn't right, a flare shoots up and Novotny is killed by a Japanese machine gun. The other men succeed in taking the beach. After he got shot Adams yells: "Novotny's hit!" 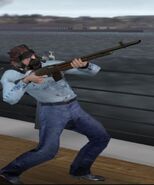 Novotny in his Navy engineer uniform.
Add a photo to this gallery

Retrieved from "https://medalofhonor.fandom.com/wiki/G._Novotny?oldid=52628"
Community content is available under CC-BY-SA unless otherwise noted.