Unknown
Fabrice Delacroix is a member of the Maquis in Medal of Honor: Underground and Frontline. He does not appear in physical form but he provides three of the four briefing notes for the missions 'Occupied!' and 'A Storm In The Port'.

Delacroix helped Manon Batiste reach the catacombs after her brother, Jacques, was killed. He was a member of the resistance team "Combat" during the occupation of France during May 1942. In 1944, he was ordered by the Office of Strategic Services to leave a resistance drop hidden as a cigar box for Lt. James Patterson to find, when he was dropped in the French town of St. Mathieu with the 101st Airborne Division. He remained close friends with Manon and was always allies in the Maquis, and perhaps Manon had mentioned Patterson's name before, because in the briefing for 'Special Cargo' Fabrice said that when Colonel Hargrove informed him that he would be the agent going on the mission to France, Fabrice was pleased to hear Jimmy's name. Fabrice had been studying the U-Boat interactions at the port of Lorient for some time, and gathered up all his findings to help lead Patterson to the facility. 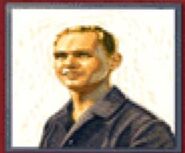