Medal of Honor Wiki
Register
Don't have an account?
Sign In
Advertisement
in: Missions, Medal of Honor: Frontline singleplayer levels

Eye of the Storm is the third level of A Storm in the Port, the second of six missions in Medal of Honor: Frontline. The level takes place outside the submarine docking pens of Lorient, France. The main setting is the docking pen area of the shipyards

Now that you've struck a blow in Admiral Karl Donitz's operation by sabotaging U-4902 and have managed to reach the dockyard, get to a safe distance and witness the results of your handiwork. Then advance into the shipyards themselves. You must infiltrate the U-boat bunkers and halt all engineering research and production at this prized facility.

If we can get you to the far side of the facility to destroy the fuel depot, we may tip the scales for the Allies in the Battle of the Atlantic.

One of our informants has concealed a case containing "tools" for you on one of the nearby warehouses. You'll find the sniper rifle quite effective against guard tower marksmen, while the demolition charges will come in handy blowing up German supply trucks along the way. Keep an eye open for the wet docks and you'll know you're close to their supply area.

As I mentioned earlier, you need to get to the far side of the facility. The least conspicuous access point to this area is through a hatch atop a warehouse near an occupied U-boat docking pen. Get on the roof and sneak inside. These shipyards are active twenty-four hours a day, so be careful, Jimmy. We're counting on you to really put a wrench in this well-oiled machine. It's essential that we shut them down, Patterson.

Jimmy is outside the submarine.

Kurt: "We had better put a tarp over this in case it rains."

German Worker: "You're such a do-gooder Kurt!"

After neutralizing several enemies near the submarine, Jimmy climbs a ladder onto the rooftop of one of the warehouses.

German Officer(Loudspeaker): "Attention all dock personnel. U-4902 has docked and must be boarded and secured immediately! There is a danger of an Allied stowaway attempting to make his way off the U-boat and into the shipyards."

Jimmy engages in combat with a couple more soldiers before locating the Resistance briefcase, containing a sniper rifle (a SpringField '03) and more demolition charges. He engages in a sniper battle with several rooftop guards. Meanwhile, the German on the crane picks up the boxes that blocked the passage.

He returns to the U-boat just in time to see it explode. Through the passage freed from the boxes, soldiers come running. He takes them all out before dealing with a pair of sailors on the docked battleship.

After fighting several more Germans he comes into a long corridor with a large squad of dock guards at the end. He manages to take care of them.

German Officer(Loudspeaker): "Security alert! The U-boat stowaway has been seen crossing the yard via the warehouse rooftops! Scan the horizon atop the warehouses and shoot anything that moves!"

Jimmy drops down into the pen. He eliminates a small contingent of workers and a scientist in a white lab coat. A group of sailors bash in through the steel door. Jimmy eliminates them as well. Up ahead, three trucks speed across the opening. Patterson follows them to a garage.

Another truck has arrived outside, offloading more Kriegsmarine troops. Patterson kills them and plants another demo charge on the truck. The explosion results in the above walkway collapsing, giving Jimmy a route into the wet dock.

This mission starts off from where Special Cargo left off. Patterson has now left the U-Boat, and ready to proceed into the rest of the Lorient Shipyard. The main objective of this mission is to infiltrate the Wet Docks facility of the Shipyard. In the beginning or the mission, Jimmy must get to a warehouse roof that has a briefcase on it. The briefcase contains a Springfield '03 rifle with a scope attached to it and several demolition charges that will be used to cause havoc across the shipyard. The destruction of U-4902 that the player prepared will now commence after the briefcase contents have been obtained. Just before Patterson reaches the Rooftop Hatch on one of the warehouses, a German Officer spreads word of Jimmy's presence, putting the shipyard on full alert. Eventually he reaches an end of the docking pen which has several supply trucks and several garages. After the trucks are destroyed, Jimmy proceeds to the Officer's room to obtain the Deployment Roster. After that, he destroys another supply truck. When he destroys it, the resulting explosion knocks down the walkway above onto the destroyed truck's roof. Jimmy then climbs to the severed walkway and then infiltrates the wet Dock. The rest of the mission of destroying the Shipyard continues in A Chance Meeting.

Eye of the Storm level map. 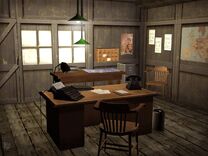