"Deuce" is a Tier 1 operator from Delta Force and playable character in Medal of Honor (2010). He is one of the four operatives of AFO Wolfpack.

In Medal of Honor (2010), Deuce takes part in an operation to eliminate Taliban and Al-Qaeda targets in the Shah-i-kot Mountains. Alongside his spotter, Dusty, Deuce moves up to Observation Post (OP) Clementine on a pair of All-Terrain Vehicles (ATVs), passing through two Taliban held villages and marking three trucks with IR strobes for Reaper 3-1, an AC-130 Gunship. They also engage multiple Al-Qaeda and Taliban groups in the two towns, and uncover intel about the Taliban and Al-Qaeda positions in the valley.

Once at OP Clementine, Deuce (aided by Dusty as a spotter) begins eliminating a Taliban mortar team and snipers as part of their mission, but are uncovered by fighters, who unexpectedly detonate the three trip-mines that the pair had set up to defend their position. After eliminating the soldiers, Dusty leads Deuce up the mountain to eliminate more Taliban, Mujahideen, and Al-Qaeda positions, but also ambush a group of Chechens who are aiding an injured comrade. However, as AFO Neptune is ousted from OP Dorothy, Deuce begins to support Neptune's retreat with the Barrett M82.

Another shot of Deuce 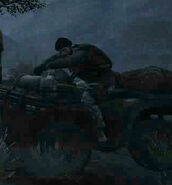 Retrieved from "https://medalofhonor.fandom.com/wiki/Deuce?oldid=52242"
Community content is available under CC-BY-SA unless otherwise noted.