Riding Out the Storm

Derailed! is the third level of the fifth mission of Medal of Honor: Frontline. It takes place in the German industrial city of Friedrichroda, and Jimmy must find transport to the Gotha jet production plant.

Sturmgeist has given us the slip, leaving you stranded several miles from the airfield. At least now we know your destination. According to the paperwork in the briefcase, the airfield is located directly outside the city of Gotha. Those railroad tracks you're following will lead right to it.

Unfortunately, you no longer have a ride. You're on foot near the industrial center of the town of Friedrichroda. You'll need to find yourself another vehicle and get to the airfield as quickly as possible. We've got serious plans for that airbase over the next day or two, and there's no way we'll complete our mission with you slowly trudging there! En route to the base, however, there are a few things we need you to do.

According to the documents in the briefcase, the industrial center of Friedrichroda is a fuel supply transport location for the Gotha production facility toward which you are headed. There are significant opportunities ahead to literally ground jet fighter production in the area, not to mention your best chance for obtaining transportation for miles to come. Work some creative elimination on the depots, Patterson, then hit the road to Gotha and find that airbase.

Jimmy must fight through the train yards of Friedrichroda, sabotaging the fuel tanks and eventually obtaining transport to the jet production center at Gotha.

You begin in front of the main car of the Panzerzug from the last mission, Riding Out the Storm. Begin by going down the path on the right. Do not go down the tracks yet! There are a few Germans and a pillbox with an MG42 covering them. The path leads around behind the pillbox, allowing access to the machine gun, which can now be turned on the Germans below. After all are dead, gather what you need from the supplies in the bunker and backtrack out to the beginning. It is now safe to proceed down the tracks. Soon one will come across a suspicious looking freight car parked alone down the tracks. Beware, as a German ambush awaits you, and more will come down the tracks to investigate the gunshots. After all is taken care of, check the car for some StG-44 ammo, a medical kit, and a Panzerschreck and ammo. Onward down the tracks, a large gate marked "Friedrichroda" can be opened, revealing a large rail yard and a singe medical kit in the center of the track. Use extreme caution, as Germans will pop up everywhere as soon as you enter the yards. Move quickly, and get behind the sandbags on the right, killing two Germans standing behind it. Grab a Gewehr 43 from one of them, and use it to take out the snipers on the rooftop behind you, the large smokestack, and in the guard tower directly behind you. Then look out and take out snipers on the large elevated building. One the coast is clear, carefully move into the first engine house on the left, and retrieve the Demolition Charges from the crate at the back (If you miss them, don't worry, there are more further ahead.), along with same another G43 and some ammo. Next, enter the elevated building, clear any remaining Germans, and look to the North and take out a Panzergrenadier along the side of the building, along with another inside the building, who must be shot through the window. With that, engage the middle control lever so that the turn table is lined up straight North/South, and descend, watching out for more Germans on the stairs. Hop aboard the small locomotive, and head into the next set of train yards. After jumping from the train, move immediately to a door in the concrete wall to the right. There are a few Germans in here, but a large amount of supplies, not to mention cover from snipers and panzerschrecks outside, are also present. If you haven't gotten some already, get some demolition charges now from in here. Outside, snipers wait on the rooftops and catwalks, and Panzergrenadiers hide in the coal bins. After the area is clear, look for another gate to the West, blow it up and proceed to the fuel dump. After destroying these, move onward to another small train engine. Use it to reach a large checkpoint. Move to the side of the bunker on the left, climbing a ladder and getting inside. Once it is clear, snipe with your G43 or us the MG42 to kill all the soldiers across the checkpoint, then move back down and neutralize the remaining threat. Board the small car on the tracks to end the mission. 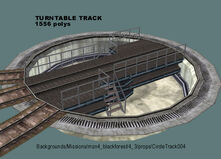 The train turntable found in the rail yard.

The hangar that was supposed to appear on the level, but was cut out.
Add a photo to this gallery

Retrieved from "https://medalofhonor.fandom.com/wiki/Derailed!?oldid=49435"
Community content is available under CC-BY-SA unless otherwise noted.