The Curtiss P-40 Warhawk is an American single-engined, fighter and ground-attack aircraft which is featured in Medal of Honor: Rising Sun and in Medal of Honor: Airborne. The Warhawk was used by most Allied powers during World War II, and remained in frontline service until the end of the war. The P-40's lack of two-speed supercharges made it inferior against the Luftwaffe fighters but it was suprisingly well performed as a ground support aircraft and as an air superiority fighter.  The P-40 offered the additional advantage of low cost, which kept it in production as a ground-attack aircraft long after it was obsolete as a fighter.

The Warhawk featured in the mission: In Search of Yamashita's Gold where Raj a member of the The American Volunteer Group (Flying Tigers) flew one to recon the temple before he was shot down. Later Sgt.Griffin found the wreckage of the fighter but Raj was taken prisoner by the Japanese.

P-40 flies over the battlefield.

In the mission "Bootcamp" a squad of P-40s fly over the player. 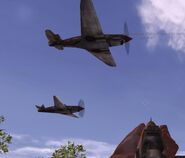 P-40 appears on the last level, "Operation: Virus House". Many of these planes fly in the sky. The player can also call an airstrike on the King Tiger and the allied P-40 will destroy it.

On the "Training" mission, several Warhawks are located outside the player's drop zone and are used as decorations.

Two Warhawks were appeared in the end cutscene of Operation: Avalance. They were sent in to destroy German long range artillery guns in order to support the Allied Invasion of Italy.

A group of P-40s appear in the ending cutscene for flying through hail were they appear escorting C-47 Skytrains.

P-40 Warhawk about to drop-off it's bombs.

Another P-40 in Training.