The Combat scope is an attachment on some weapons throughout the Medal of Honor series. They are designed to offer increased zoom and accuracy, at the expense of some peripheral vision.

A combat scope is available to the player to use on the StG-44. It functions much like a sniper scope, but it has less zoom and no way to stop the idle sway which is added with the scope. Also the scope can be detached if the player wants to.

StG-44 equipped with the ZF4 Scope.

In the 2010 release of Medal of Honor, there are several types of combat scope.

The ACOG is available for most starting weapons in one way or another; most U.S. Army Rangers' M4A1s come equipped with them. The reticle is a simple cross with some distance lines. Rabbit's M14 EBR has a ACOG, as does Dante Adams' M4A1 during the final mission of the game.

This is also the scope available in multiplayer, but the scope shares very little in common with its singleplayer variant. It is mounted on all Coalition forces' weapons with a few exceptions.

M145, a variant of the C79, is only available for the M249 during Belly of the Beast. It takes up most of the peripheral vision, and has a red dot for pinpoint aiming, although it is very hard to see in high-light conditions and while moving due to the fact that the dot physically bounces back and forth whilst moving. It has several rangefinding lines, though they serve no purpose.

The PK-AV is used on the AK series of weapons used by the OPFOR.

The combat scope, equipped on a G3. 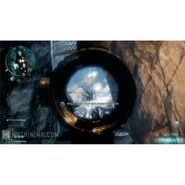 Aiming down the combat scope.

The combat scope, equipped on the M14 rifle.

Aiming down the combat scope on the M14 EBR.

Aiming down a combat scope on the AKS-74u carbine 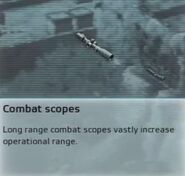 Render of the Combat Scope.
Community content is available under CC-BY-SA unless otherwise noted.
Advertisement