M2 machine gun or Browning M2. 50 caliber machine gun is American heavy machine gun designed by John Moses Browning. The weapon uses .50 caliber cartridge, much larger than Browning machine gun which used .30 caliber size. John invented the weapon during the World War I in 1918, when General John J. Pershing asked for a larger caliber machine gun, which proved effective in battle. The use of that weapon started in 1933, after John's death in 1926 and several manufacturers began to produce it. The weapon saw use in World War II and after the war in some conflicts and is used in infantry, as anti-aircraft gun on ships, aircraft, boats and on armored vehicles as anti-vehicular gun. Browning M2 is one of the few weapons to be produced today, along with M1911 pistol.

The Browning M2. 50 first appears in the mission "Day Of Infamy" where it can be used to shoot down Japanese planes and destroy the torpedos in the water. 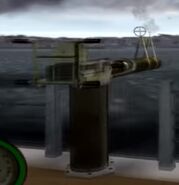 The M2. 50 first appears in Pearl Harbor on the deck of the West Virginia where the player must use it to cover the Nebada by protecting it from dive bombers. The Japanese zero plane then crashes into the ship destroying the gun.

Another machine gun appears in the mission Henderson Airfield where the player must use it to kill Japanese soldiers on the runway.

The Browning is used last time on the Tarawa where the player uses it to clear japanese positions.

Some Browning machine guns also appear in some multiplayer maps such as Airfield.

A soldier roasts a 50 cal on the West Virginia deck.

A Browning in the map Airfield.
Community content is available under CC-BY-SA unless otherwise noted.
Advertisement