Corporal Barnes is a soldier in the 82nd Airborne Division in Medal of Honor: Frontline. He appears in the mission 'Rough Landing'.

Barnes knew Jimmy Patterson before the war as he was a member of the same country club that he belonged to, and the last time Patterson saw him was when Barnes was preparing for demolitions training.

Barnes also took part in Operation Overlord with the 82nd, landing behind enemy lines and proving that he was a truly skilled soldier. Colonel Stanley Hargrove of the OSS described his performance during Overlord as "stellar". It is not revealed which beach he was fighting in at the time.

During Operation Market Garden, Lt. Jimmy Patterson is assigned to protect him as he plants demolition charges to destroy Panzer IV tanks around the city of Kleveburg, Holland. Him and Patterson's comrade, Private Timothy Connor, was killed when his parachute snagged and he was shot. A lost soldier, Terry Langteau, is rescued by Patterson and taken in to help provide cover fire for Barnes. The fight through the countryside was a fierce one, meeting up with an overall five tanks in the process. At the end of the mission, near the actual gate to Kleveburg, Barnes tells Jimmy that he and Terry Langteau have to meet up with a Dutch resistance contact in a different area. They say goodbye and he is never mentioned or seen again. 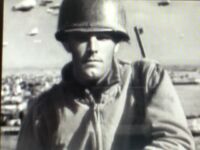 Barnes in game.
Add a photo to this gallery
Retrieved from "https://medalofhonor.fandom.com/wiki/Barnes?oldid=48287"
Community content is available under CC-BY-SA unless otherwise noted.